Which goaltender was worse: Ty Conklin or Jacques Cloutier?

The final eight were set yesterday as Craig Billington moved into the second round with an easy win. The second round begins with the tournament's sentimental (least) favorite taking on a goaltender with one of the worst statistical records in the tournament but no emotional connection. Consider it a test in how detached we are as fans.

One of the reasons I had Cloutier seeded 13th was his lack of post-1995 play. A good chunk of our readership has never seen him play, and I thought that might make him an easy out. It didn't turn out that way. Instead, Cloutier hammered Dan Cloutier and arrived in the second round to face Ty Conklin. Cloutier is one of just two goaltenders in this tournament to be worse than league average in every season he played at least twenty games. But he didn't play more than 20 games in every season, and that's why I decided to add a new statistic that weights each shot equally and compares that to how an average goaltender would have performed. So, for example, Cloutier faced just 65 shots in the 1992-93 season, representing just over 1% of the total shots against for his career, and thus 1% of his career save percentage. When I calculated what an average goalie might have done, the average performance from 1992-93 represents 1% of the total. Using that system, we see that Cloutier's career save percentage of .874 compares rather unfavorably with the .881 we'd expect if he had been an average goaltender, but to be honest, the gap isn't quite as wide as I was expecting. Of course, if you remember these charts from last time, you'll know that Cloutier is, in fact, a terrible goaltender.

One of the reasons that I wanted to look at career performance is Conklin. In the seasons he played at least 20 games, Conklin was generally pretty good. But in the seasons that he didn't? Terrible. A season of .880 with the Oilers in 2005-06, .879 with Columbus and Buffalo in 2006-07, and .884 with Detroit in 2011-12. When we include all of that data, Conklin's career .906 save percentage compares to an expected save percentage of .909. It's still not as bad as Cloutier, but it's not good either. Will the fact that Conklin broke our hearts be enough to push him over the top?

Here's how Conklin compares to league average and to his teammates in every season he played at least 20 games: 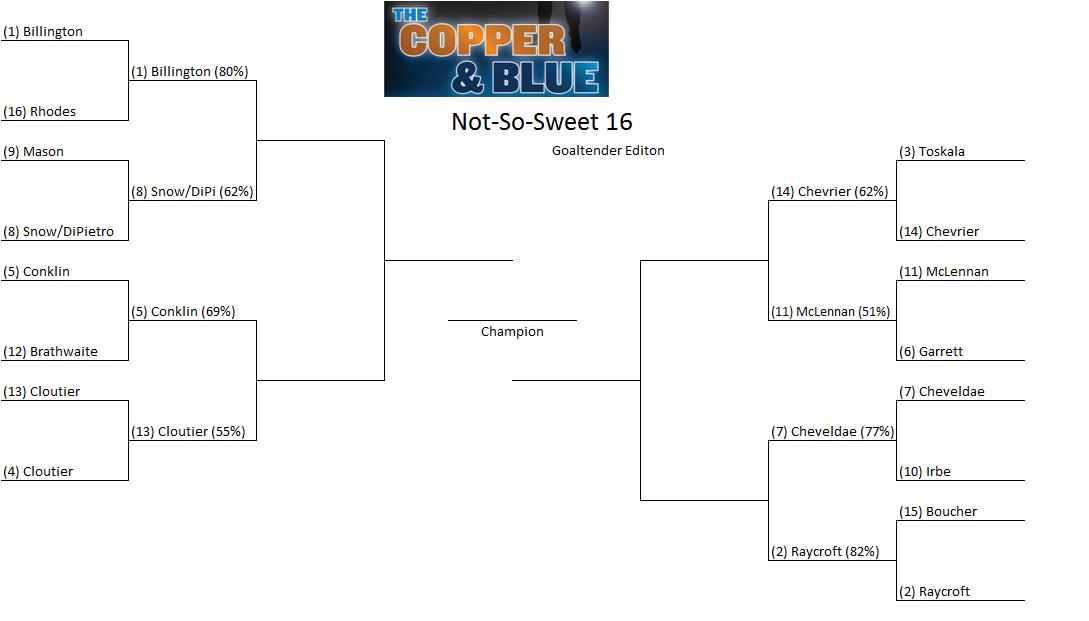