The Best & Worst Possession Teams of the Last 5 Years

The Oilers should try to become a better possession team. I'll try to prove why...

Share All sharing options for: The Best & Worst Possession Teams of the Last 5 Years

Something special is brewing in Oil Country, and I wanted to fill everyone in on the fun. The Oilers are currently sitting dead last in the NHL for 5 on 5 Corsi percentage -- they've only recorded 43.8% of Corsi events in that game situation so far this year. Now, when we talk about Corsi, it's usually referred to as a proxy for puck possession, so just think of this number in that fashion: it's a percentage of time your team has possession of the puck in a season.

This troubling level of possession has dogged the Oilers all year, mostly because anyone outside the defined trio of Taylor Hall, Jordan Eberle, and Ryan Nugent-Hopkins has had problems approaching or getting above 50%. If no one outside your top line can saw off the competition, you're likely going to be in trouble. 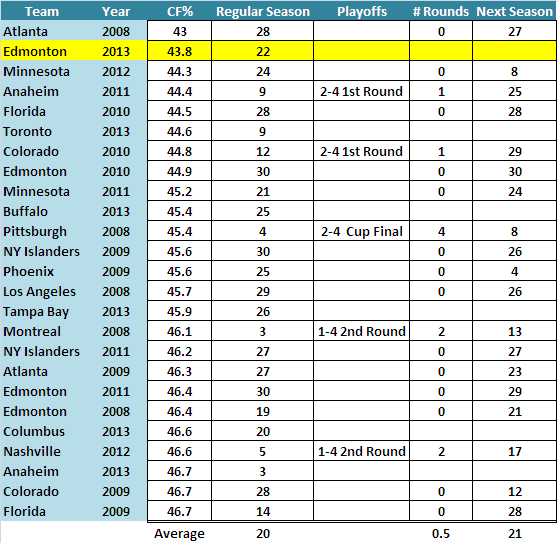 You can see the Oilers perched near the top and currently 22nd in the NHL standings. It's not uncommon at all for teams such as these to be low in the standings, actually Corsi is an incredible predictor of where you will finish. Only 5 out of these 25 teams made the playoffs, though Toronto and Anaheim look like they'll be adding to that total this season. The average standings placement of these 25 worst teams was 20th overall, which is actually a bit higher than I thought it would be. They averaged playing in half of a playoff round. But perhaps most dispiriting is that their average standings placement the next season was even worse at 21st. This suggests that poor puck possession teams do not immediately recover very frequently.

But let's have a quick look at the couple of clubs here that did improve substantially. What happened?

Probably the most obvious thing that happened to the Coyotes after the 2008-2009 season was that Wayne Gretzky stopped coaching them. He'd had a pretty disastrous 4-year coaching run, considering he'd never steered them into the playoffs. He was replaced by Dave Tippett before the 2009-2010 season, after which the Coyotoes have never missed the playoffs. Their 2008-2009 roster had an experienced first line of Doan/Jokinen/Reinprecht, but most of their good young players were between the ages of 19 and 22 (Turris, Hanzal, Boedker, Mueller, Yandle, Tiknonov) and not quite ready to carry a team. Sound familiar?

In the summer of 2009, GM Maloney went crazy signing value UFAs and bringing in veteran help. He added Robert Lang, Radim Vrbata, Taylor Pyatt, Matt Lombardi, Scottie Upshall, Vern Fiddler, and Petr Prucha up front to bolster their young kids and take some of the pressure off. It was an unheralded but experienced group of forwards who could turn the play up ice. They responded by putting the team into 4th in the NHL the following year. Not that there's a lesson in here for the Oilers though...

Obviously the season is not finished for the Wild this year, but they've improved greatly from their position last year and project to make the playoffs pretty easily. So what happened? They've got the same GM, same coach, and a lot of the same supporting cast. The biggest changes, obviously, were the insane-money contracts they waved at Ryan Suter and Zack Parise last summer to join the team. They immediately became the Wild's best two players -- and when you add a new best forward and best defenceman in the same offseason, you'll likely improve markedly the next year. There aren't UFAs available of the quality of these two this summer, but I think the lesson is that going big game hunting isn't always a stupid pursuit if you have an organizational need for it. The Wild also succeeded in prying a proven top 4 defenceman from a perennial also-ran in Tom Gilbert. In the Oilers' case, many people have made the case that they are lacking an impact defenceman of the quality of Suter. I'd agree with them, but giving away Gilbert for an inferior player still doesn't make sense to me.

But what about the best possession teams of the last 6 seasons? Here's that table: 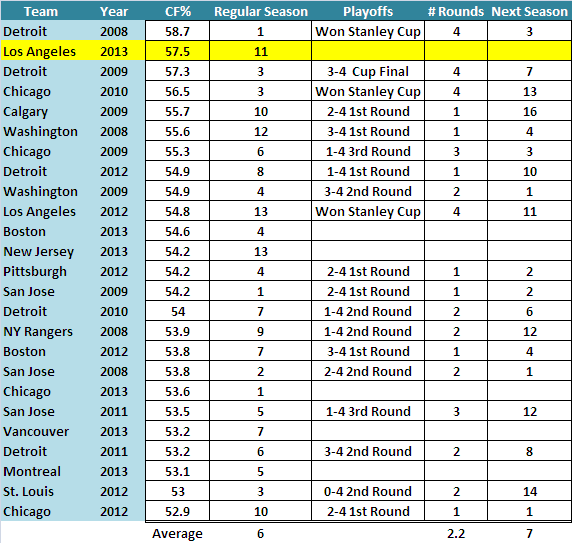 What do you notice immediately? Three of the top 4 teams in terms of Corsi percentage either won the Stanley Cup or made it to the final. I've highlighted the other team in the top 4, this year's LA Kings who are quietly putting together an incredibly effective campaign possession wise.

The other thing you should notice is that every team on this list made the playoffs, and every team in the current season very likely will as well. The average standings placement was 6th overall, the average playoff performance was 2.2 rounds, while their average placement the season afterwards was 7th overall. This shows that good puck possession teams tend to be good teams, and tend to stay good teams. The only team in this list that did NOT make the playoffs the following season was the 2009-2010 Calgary Flames, after putting up a (surprisingly) dominant campaign the year before.

So what is the statistical relationship between 5 on 5 Corsi percentage and standings placement? I ran a quick multiple regression to test the relationship -- it was very strong. They have an R-squared correlation of 27.2%, meaning 27.2% of the variability in how your team finishes is determined by their 5 on 5 Corsi percentage. Corsi% has a T-stat over 8, and we have 99.999999999999% confidence that there is a statistically significant relationship between the two variables.

So for every Corsi percentage your team drops by, your standings placement is expected to drop by about 1.5 positions.

This equation predicts that a team with a 50% Corsi percentage would finish about 16th overall in the league. It predicts a team as bad as the Oilers this season would normally finish about 25th. A team as good as the Kings this year would be expected to finish between 3rd and 4th.

And if you compute the Leafs' predicted placement this year -- well, let's just say, if the Leafs don't have two players as good as Crosby and Malkin on their protected list, I'd bet a lot of money on them losing in the first round this year.