Which goaltender was worse: Ty Conklin or Fred Brathwaite?

Yesterday's vote was extremely close, but in the end, Jamie McLennan pulled off the first upset of the tournament, defeating John Garrett by a single ballot. Today's vote will be open all weekend before the Not-So-Sweet Sixteen continues on Monday, but I get the feeling that the vote won't be quite as close. Yeah, there are two Oiler alums duking it out, and yeah, they were both bad, but only one of them did this:

So yeah. The rest of this post is more for the sake of completeness. Go ahead and vote now.

He's a former Oiler, but Fred Brathwaite was also the starting goaltender for the Calgary Flames for 1999-00 and 2000-01. Before we chortle too loudly, those Calgary years were the best of his career. The Flames were even able to flip Brathwaite to the Blues for real value in the summer of 2001, trading him along with a couple of older prospects in exchange for Roman Turek. The Blues were one of the best teams in the Western Conference at that point, but Brathwaite immediately went into the tank, and his partner, Brent Johnson, wasn't much better. If that team had solid goaltending, the good people of St. Louis might remember the Joel Quenneville years even more fondly. After two years of stinking up St. Louis, there was a quick stop in Columbus before Freddie was out of the league.

Here's how Brathwaite compares to league average and to his teammates in every season he played at least 20 games:

If you just look at the charts I've made, Conklin actually looks pretty darn good. That's not because he was a good NHL goalie, but rather because of the benchmarks I've set. Conklin's 2005-06 season doesn't quite qualify for my charts because he only played in 18 games. His other horrendous seasons in 2006-07 and 2011-12 also don't make the 20-game mark, and thus Conklin looks like an above-average goalie who's being dragged down by one final poor season. Fans of the Edmonton Oilers know better. They know the pain this man can cause.

Here's how Conklin compares to league average and to his teammates in every season he played at least 20 games: 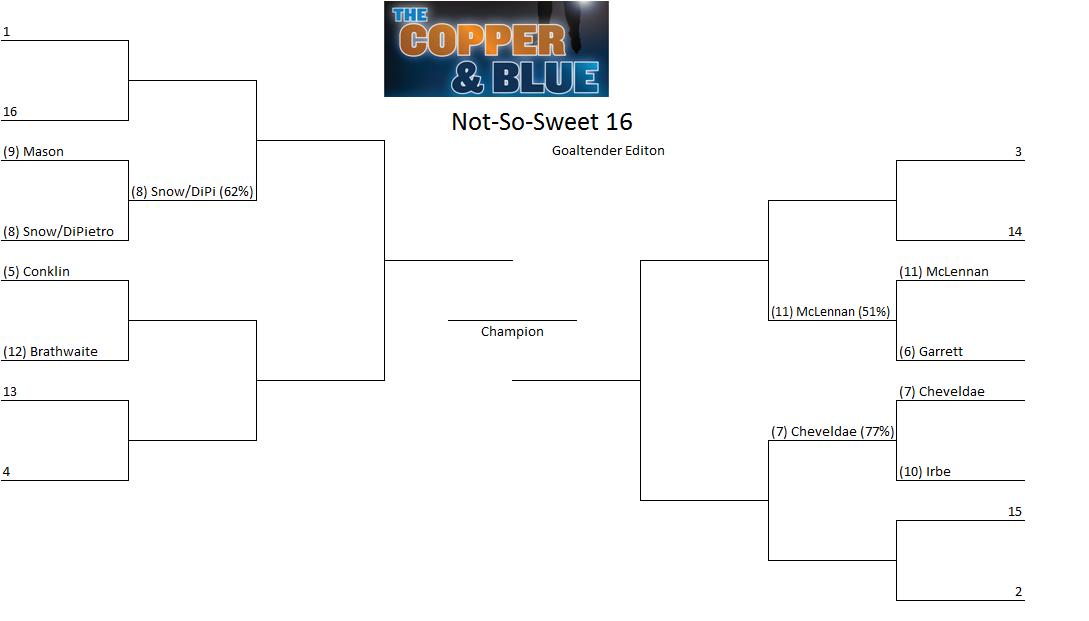