Which goaltender(s) was worse: Garth Snow and Rick DiPietro or Steve Mason?

Share All sharing options for: The Not-So-Sweet Sixteen Returns!

The NCAA basketball tournament begins today, and while I don't actually pay much attention to college basketball generally, the emotion on display in these games is amazing. That the tournament caters to my lack of knowledge by seeding all of the teams is also very helpful, and the single elimination format always leads to incredible moments.

Here at the Copper and Blue, I've taken to marking the season by doing a tournament of our own, the Not-So-Sweet Sixteen, and this year is no exception. In the first edition, Rick DiPietro walked away with the title of worst active contract in the NHL. In the second, we crowned Don Waddell as the worst general manager of the 2005 CBA. This year, we're going a bit more historical.

From time to time, fans have conversations about the greatest of all time. Is Gretzky the best ever? Or is it Howe or Orr? Is Patrick Roy the best goalie, or do you prefer Hasek, Brodeur, or maybe someone like Terry Sawchuk? (Aside: if you haven't read Bruce's old article about Terry Sawchuk, you really should). These are fun questions. But you know what else is fun? Talking about who was the worst.

And that's what this tournament is all about! This year's Not-So-Sweet Sixteen will be focused on crowning the worst goaltender in the NHL since the Edmonton Oilers entered the league. And I'm talking about people like Joaquin Gage or Mike Morrison. We're talking bonafide NHL goalies here, men who played in at least 200 regular season games since 1979-80. Today we've got the 8-9 match-up, which features a couple of players still under contract, one of whom is looking to win his second title in three years. As always, we'll be relying on your votes for the decision!

Steve Mason showed well in his first NHL season, but things have pretty much gone to pot since then. Scott Howson put a lot of trust in Mason over his tenure as GM, and ultimately, it cost him his job (and almost earned him the title of worst GM of the 2005 CBA). In an alternate universe where Steve Mason is replaced by an average or (heaven forbid) an above-average NHL goaltender, the Columbus Blue Jackets might still have Ken Hitchcock coaching, Rick Nash still scoring, and a heartening conclusion to their decade-long rebuild. Instead, the Jackets are once again fighting for the basement and Steve Mason is having his second consecutive season with a sub .900 save percentage.

Here's how Mason compares to league average and to his teammates in every season he played at least 20 games:

This is the only tag team in the tournament, but they just go so together so well! Snow was mostly a back-up goalie through his career, well-known for his oversized equipment, but not so well-known for his ability to stop pucks at an above-average rate. He was, of course, also Rick DiPietro's back-up during his last season, after which he became the team's general manager and signed DiPietro for eleventy billion years. It didn't work out so well. Yeah, DiPietro had some injuries, but he also wasn't all that good even before the injuries. Like Mason, DiPietro still has time to turn things around, and in fairness to him, his play in the AHL (first game excluded) has actually been pretty decent.

Here's how Snow and DiPietro (combined totals) compare to league average and to their teammates in every season they played at least 20 games: 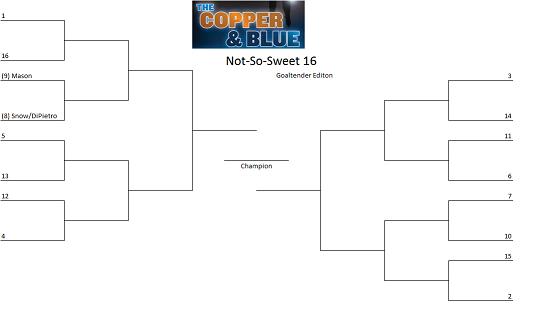