Rumours that the Oilers may acquire former players puts us in a whimsical mood...

Firstly, I'd like to say that I'm humbled and honoured to be writing for C&B -- it's been one of the very best Oilers blogs for a very long while. Secondly, if you've read my previous stuff at boysonthebus.com, you'll know that I tend towards the stat-heavy advanced metric stuff along with fairly decadent walks through hockey history. Thirdly, I have not been provided with a C&B style guide, so I'm going to assume it's ok to accuse players of being part of another species from time to time.

For my first post, I'd like to explore a topic very near and dear to any Oiler fan's heart. With recent media chatter about the Oilers potentially seeking veteran help to shore up both Centre and Defence, a couple of names have come up that fans of a certain age may recognize: Jason Arnott and Roman Hamrlik. Both of these players spent time in the Oil Drop during the mid to late-1990s, participating on some of those plucky teams that slayed the Stars and Avs oh so many moons ago.

However, this isn't a new trend -- Oiler players have been doing multiple tours of duty with the franchise since the 80s. You all know the saying: "You can take the player out of Edmonton, but you can't take the desperate paycheque out of the player", or something like that.

I took a look throughout Oiler history to find cases of players who played games for the team, left to play NHL games for another team, and then returned to the fold. Of course, this takes out players who were farm hands getting into games in discontinuous seasons or players who left for Europe only to return to the Oilers (hello Kent Nilsson and Dick Tarnstrom!). In all, 14 players matched my criteria, neatly summarized as follows: 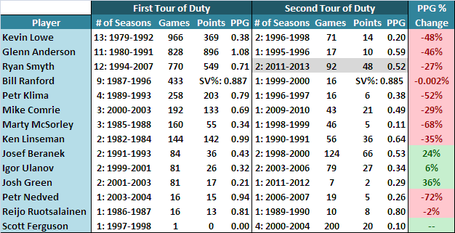 The players are sorted in descending order of how long their first tour of duty was. Not surprisingly, we have two Dynasty Oilers at the top of the list. Kevin Lowe left after the 1992 season in a trade to the Rangers, but returned to the club only 4 years later to vertiginously finish his career in Oiler silks. Anderson was traded to the Maple Leafs at the end of the 1991 season, and ploughed through 3 other NHL franchises, 2 European teams, and 2 stints with the Canadian National team before returning in 1996 for a quick 17 game cup of coffee between waiver claims from Vancouver and to St. Louis.

Ryan Smyth is the only active returnee, now in his 2nd season with the Oilers after spending 12 seasons here previously. The Oilers probably should have retained his services in the 4 intervening seasons, but they really, really preferred having Alex Plante play 10 NHL games for them instead.

You can see that in 10 of the 14 cases, the players' return trips in Oilers silks were less productive than their first -- only Beranek, Igor Ulanov, Josh Green, and Ferguson managed to outscore their previous paces. In many instances the productivity fell off precipitously, with Nedved's output falling 72%, Marty McSorely's down by 68% (largely due to a position change to D), and Petr Klima's down by 52%

The longest break between tours? Why that's McSorley's 10 full years between leaving during the Gretzky trade in 1988 and being signed as a free agent in 1998. (As an aside, I was surprised how few games McSorely played for the Oilers during his first tour here -- only 160). The 2nd longest break would be Green's 8 year AWDL (absence with definite leave) between 2003 and 2011.

If either Arnott or Hamrlik signs, they will take over the mantle of having the longest period between tours -- it will have been 15 years for Arnott, and 12 years for Hamrlik since they left the Oilers originally (both were traded). The issue of whether they should be signed is a separate topic entirely, but I did write a post recently that argued against signing Arnott in favour of other possibilities. Having a quick look at Hamrlik's numbers from last year shows he played pretty well aganist weaker competition, and might fit in well on the 3rd pairing. Having two feet that weren't cast in carbonite automatically places him ahead of Whitney, doesn't it?