Kris Letang Keeps The Puck In, Spins, Then Goes Tape To Tape

Kris Letang's brilliance in the offensive zone, captured in one sequence.

Share All sharing options for: Kris Letang Keeps The Puck In, Spins, Then Goes Tape To Tape

One of our regular readers alerted us to this two nights ago, and it's worthwhile to share. The play occurred just prior to Beau Bennett's first goal as a professional, in the Penguins 5-3 win over the Lightning. The Pens were leading 3-2 at the time and on a 5-on-3 power play as a result of a Sami Salo interference penalty. Second assists take a beating from some, but this is a well-deserved second assist.

Chris Kunitz gained the zone cleanly and hesitated as James Neal went to the goal line. Neal received a pass from Kunitz and quickly threw a pass through the slot, but the pass was too hard for Bennett and deflected back towards the neutral zone. Letang entered the zone at the right point, but began to transition to the left point as he switched with Crosby. Letang raced to the left point to hold the puck in, which he did on the backhand on the blueline itself, spun to protect the puck from Adam Hall, who was following the errant pass up the boards, and as he spun into Hall, threw a perfect pass onto Sidney Crosby's stick, 75 feet away. The clip is below: 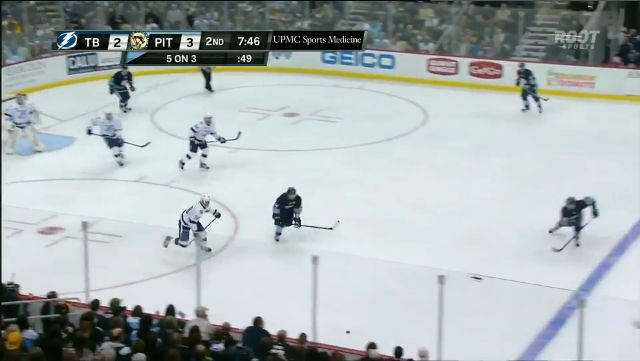 Next up is his hold and prep for the cross-ice pass to Crosby: 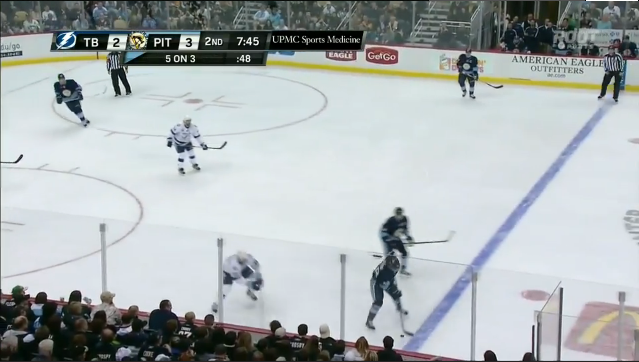 Letang's work here is a thing of beauty, and just part of the reason he's been worth of a Norris Trophy for the last few seasons.

It's worthwhile to note that the Pens player closest to him is Chris Kunitz, the same guy who started the zone entry on the opposite side of the rink, went to the net after passing to Neal on the goal line and turned to chase the puck down after the errant pass. He keeps moving through the zone - a lesson that the Oilers, and to a lesser extent Eric Tangradi, should take to heart.

h/t to my dad for telling me to watch Letang's play.