Tyler Kennedy may not get many accolades but he's a very important part of the Penguins attack and he's very hard to play against.

Despite losing Evgeni Malkin to a terrible-looking injury last night, the Pittsburgh Penguins beat the Florida Panthers 3-1 on goals from Matt Niskanen, Chris Kunitz and Dustin Jeffrey. The Jeffrey goal video clip is below.

While the announcers are infatuated with the save on Tyler Kennedy's shot and then with Matt Cooke's pass, they miss the key aspect of the play, namely Tyler Kennedy's awareness, puck smarts and hustle. After Kennedy enters the zone and attempts a shot, he coasts down the right circle, watching the result of the shot. Kennedy's positioning is captured in the still below:

After the shot, the puck is pushed back behind the net, out of reach of everyone on the ice. At this point, Kennedy is the only Pens forward who knows where the puck is, but both Brian Campbell and Drew Shore know that it's behind the net. Note all five Panthers below the hash marks in the still below. Kennedy has drifted towards the slot:

Shore circles around Matt Cooke and retrieves the puck, and everyone is fully aware of the location of the puck. As Shore circles to his right, Kennedy is already moving in the same direction, his left, to head Shore off in the zone. The still below captures Kennedy's first stride to his left:

Matt Cooke reaches in an attempt to stop Shore, and Dustin Jeffrey takes a step towards Shore - a bad first step considering there is no chance Jeffrey can get to the puck-carrier or the passing lane. Note Kennedy's movements in the still below. At this point, he sees that Shore has no options other than the far wall because all five Panthers are on the same side of the ice and below the hash marks. In the real-time video, this is a split-second decision - Kennedy recognizes it and takes off towards the faceoff dot. But it frame-by-frame, it's easy to see the decision unfold in front of Kennedy:

There isn't much change to the still below, but note that there are nine players in the frame and eight of them are staring down the puck. The ninth, Kennedy, is the only one moving quickly. 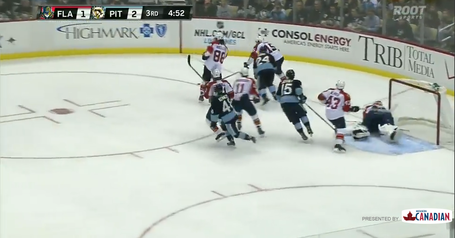 Now the play unfolds. Cooke missed with his reach, Jeffrey is pivoting and Shore is set to race up the sidewall with the puck. Kennedy, however, has already cut him off, even though there is 30 feet between them. Kennedy was able to do this because Shore has no outlet options - the entire Panthers team is within 40 feet of each other and Cooke and Jeffrey are forechecking in the midst of the six Panthers. So Shore is forced into Kennedy's line.

Look back over the last four stills and look at the one below. Note Campbell and Huberdeau. In the time it took Kennedy to move 35 feet towards the far boards, Campbell and Huberdeau combined to move less than 20 feet. In the still below, they are just starting their turns out of the zone - their first purposeful movements in the sequence. Both were caught staring at the puck and now Kennedy has eliminated them as breakout options:

The still below shows how limited Shore is. Mike Weaver is a safety option, but would require a drop pass through two Penguins forwards at his own net. The other three Panthers are now within 15 feet of each other, and that cluster is within 35 feet of Shore. Kennedy has eliminated both Peter Mueller and Campbell as options and has now obviously cut the puck carrier off:

Shore realizes the situations in front of him and tries to push the puck through Kennedy to Campbell:

Kennedy deflects the puck, now moving towards Matt Cooke in the still below. The three Panthers who were clustered on the breakout are now clustered with Shore at the top of the faceoff circle - four players within 40 feet of each other: 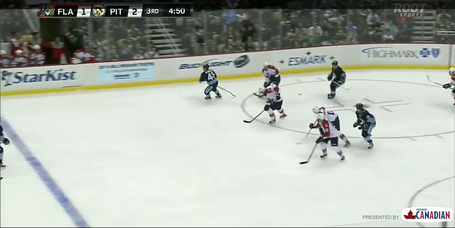 From there, Cooke gets the puck to Jeffrey and the Pens score. The entire goal was created by Tyler Kennedy's recognition of the situation and his hustle to get to a spot on the ice and cut off the puck carrier.

Players like Kennedy are very often overlooked in the discussion of building a successful team, but as demonstrated above, even when Kennedy isn't scoring goals, he's creating them. Contrast that to the Oilers' bottom end of the lineup - Ben Eager, Lennart Petrell, Anton Lander, Darcy Hordichuk - players that don't create goals. In fact, they're actually players who are buried in their own end by players like Tyler Kennedy.

Players like Kennedy, Daniel Winnik, Carl Hagelin, and Brandon Sutter push the puck the right way - forcing their opponents to play defense. Players like Ben Eager and Theo Peckham never have the puck - they allow their opponents to play offense. While the Edmonton management team and coaching staff talk about players like Ben Eager and Theo Peckham being hard to play against, in reality, those players pale in comparison to the real hard to play against guys like Tyler Kenndy.