An Unsightly Fortress - The Top 25 Under 25 Continues

We opened the Top 25 yesterday with a group of six players, and Daniil Zharkov dominated the vote like a federal Conservative in rural Alberta. Today, we'll talk about seven more players, six of whom missed the cut in the combined rankings (though with thirty-four different players getting at least one vote inside the Top 25, we're not exactly operating on consensus here).

Share All sharing options for: An Unsightly Fortress - The Top 25 Under 25 Continues

For those of you who like the exercise, but figure one opportunity to vote just isn't enough, don't forget to try your hand at providing your own rankings. Now, on to today's candidates!

Mark Arcobello - Old man Arco wasn't given much of a chance in our last edition of these rankings. Alan had him ranked the highest, but even he had Arcobello at #31. But this season has been impressive. When Arcobello got called up to the NHL, I decided to take a look for some similar players. At the time, Arcobello had registered 0.91 points per game, and had played over 40 AHL games, so I decided to look for players who scored between 0.81 and 1.01 points per game during at least 40 AHL games in their age 24 season sometime between 2005-06 and 2011-12. Here's what I found: 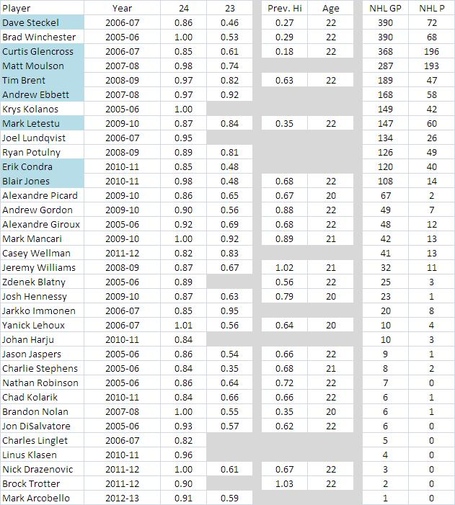 The guys currently in the NHL are highlighted in blue. I've got the age 23 scoring in there too to help look for guys who made a similar jump. Interestingly, I wasn't looking just at players who made the NHL... they just all happened to make it, at least briefly. That part was surprising. What wasn't surprising was that most of them didn't stick around. Still, of the thirty-three other players on this list, about a third played 100 games, and a couple of them are real contributors. That doesn't give him great odds, but it's probably a better shot than a lot of other guys on this list. Last Ranking: #38.

Kellen Jones - His scoring is down significantly from last season (0.54 points per game compared to 1.00 last season), but Jones is still the fourth best scorer on the very best team in the country. No one on the team is at a point per game level, and just one player is above 0.8, so it's not like Quinnipiac has pushed him way down the lineup. Jones's shooting percentage is just 7.7%, so he certainly isn't getting much love from the bounces, while his shot rate is a very respectable 2.8 per game. If you place a premium on playing a major role for a winner, you might bump Jones up the list. Last Ranking: #41.

Joey Laleggia - The small defenseman is currently tied for second in team scoring with 24 points in 29 games after scoring 38 in 43 as a freshman in 2011-12. He's currently second among defenders in the WCHA in scoring, and in the top thirty overall. When it comes to Laleggia, offense isn't a concern. The concern is that he's just 5'9'', and there aren't many effective NHL defenders who are that small (just three have taken a shift so far this year: Francis Bouillon, Jared Spurgeon, and Marc-Andre Bergeron). Unfortunately, we won't know whether or not Laleggia can make the transition to the pro game until he actually makes the jump, and with the glut of "might-be-something" defensemen in Edmonton's system, Laleggia may well be in college for a while. Last Ranking: #31.

Ryan Martindale - Here's a player who has improved his position in the organization significantly from last season. Of course, Ryan Martindale was starting from a pretty crummy position. Martindale spent the majority of the 2011-12 season in the ECHL, scored less than half a point per game, and registered one of the worst plus/minus ratings on the team. This year, Martindale began in the AHL, and when the players at the top of this list left for Edmonton, Martindale grabbed himself a spot. He's got just 11 points in 19 games, and his shot rate is poor (1.5 per game), but Martindale seems to have successfully made himself an AHL regular, which is a big step in the right direction. Last Ranking: #32.

John McCarron - There are some things to like about John McCarron. He's a big and mean, and he shoots the puck. It's just two things, but I'll take them, especially that last one. McCarron has just five goals and twelve points in 22 games this season, but he's taken 72 shots on goal. That works out to 3.3 per game, the best shot rate on the team, and one of the best in the ECAC. You'd hope to see the player scoring as well, of course, and the 54 PiMs is both good and bad, but there's enough here to keep me interested in McCarron going forward. Last Ranking: #42.

Alex Plante - I think Alex Plante had a pretty good chance at an NHL career, but at this point Alex Plante should probably retire from professional hockey. Plante has had a lot of concussions (at least three and probably more). He was eligible for waivers this season, and every NHL team took a pass. His own organization is making him a healthy(ish) scratch in the AHL on a semi-regular basis. Plante is not getting closer to the NHL and his long-term health is probably of some concern. I understand that these players generally love playing hockey, and that the rewards for making it to the NHL are great, but at this point, Plante is an extreme long-shot. If my calculations are correct, the young man has earned over $500,000 playing hockey over the last four seasons. It might be time to take some of that money and get some training in a field that doesn't involve hits to the head. Last Ranking: #23.

Kristians Pelss - The Latvian forward has had an interesting season so far. He spent a good chunk of time in the ECHL where he earned himself a 21-game suspension for spearing. But after returning, he established himself as a regular in the AHL, appearing in each of the last 11 games. He also learned a few days ago that he's got a decent chance of playing in the Sochi Olympics (though it would probably be better if he was playing in the KHL). Pelss wasn't a great scorer in junior, so I don't expect much offense from him, but I have been impressed with his work along the boards almost every time I've seen him play, and ridiculous suspension notwithstanding, Pelss has been able to stay out of the penalty box since turning pro. If he can develop his game as a penalty killer, and play a hard game at even strength while improving his offense just a little, I think he's got a shot. Last Ranking: #37.