The Best Players Ever - Round of 13

Share All sharing options for: The Best Players Ever - Round of 13

The last vote was the closest one we've had to date, but in the end, Nicklas Lidstrom received one more vote than Sidney Crosby, and was eliminated because of it. Given that they were well ahead of the rest of the pack, that might make today's vote an easy out with Crosby being the one sent packing. I hope that isn't the case, as I think it should be another forward in the group packing his bags. As always, indivdual profiles for each of today's contenders can be found at the links below:

So in a group like that, why should we be sending a forward home? I've been over this before, but I think Eddie Shore and Bobby Orr should be safe to the end. In my view, they're the only two defensemen to be the very best players of their era for an extended period of time. Dominik Hasek is, in my view, the best goaltender ever, and should therefore be safe too. That leaves Bourque and Roy, and I'll grant that it would be reasonable to vote for either of those two players at this stage of the tournament. I won't be just yet, in part because each of these two has done something no other player in the league's history has accomplished: Bourque was named a First Team All-Star thirteen times in his career, more than any other player, and Roy is a three-time Conn Smythe Trophy winner, the only player to win the award that many times. They've both, obviously, got many other accomplishments, but having a unique accomplishment is, in my view, pretty valuable.

So if I'm voting for a forward, why shouldn't that forward be Crosby? I've spoken already about how Crosby is well ahead of his peers in terms of point-scoring, and that distance between him and second place over a large period of time is indeed impressive. But even comparing him to the other forwards in this group from age 18 to age 25, Crosby look awfully good. In the chart below, I've normalized each forward's points per game to a league in which six goals are scored per game (seasons in which a player played less than 30 games are highlighted in blue).

Crosby is closer to Lemieux (and actually jumps ahead if we exclude Crosby's 18-year-old season) than he is to the pack of other greats. When I look at Crosby, I see a player who has done so much in his short time in the league that I can't justify eliminating him. Some will want to see Crosby amass more individual trophies, or simply play a few more seasons to show that he can sustain this level before they're ready to put him in their top ten. I understand that, but for me, he's done enough already to earn his spot.

So who does that leave vulnerable? Well, there are five forwards on that list after Crosby, and in my view, a few of them aren't totally safe. Given that all of these players have played well past age 25, the chart above may not be particularly helpful in comparing them. As such, the chart below again normalizes each forward's points per game to a league in which six goals are scored per game, but will look at performance from age 22 to age 39 (seasons in which a player played less than 30 games are highlighted in blue, the best points per game in the group is highlighted in green, and the worst in the group is highlighted in red): 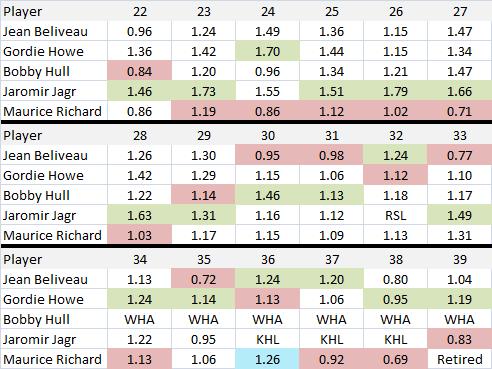 Jaromir Jagr comes out of this comparison looking fantastic. In terms of adjusted points per game, Jagr dominates the group through his 20s, and holds his own in his 30s. Some will question Jagr's totals because of the presence of Mario Lemieux on his team for much of this period, so I thought it would be worthwhile to highlight the fact that Jagr's Penguins didn't have Lemieux during Jagr's 22 year-old or 25-to-27-year-old seasons. I was actually pretty surprised to see Jagr do so well here, but I think there's enough to say that he's safe.

Gordie Howe also looks good in this chart, and we haven't even looked at his last (very impressive) decade of professional hockey. I don't think there were many folks considering a vote for Howe, but still thought it was probably worth saying that he should be safe.

That leaves three more forwards, and I think there's a case for each one. Richard, in particular, gets clubbered in this comparison, finishing with the worst adjusted points per game in half of the eighteen seasons, and the best points per game in none of them. Beliveau (four worst, three best) and Hull (two and two before leaving for the WHA). So what might save Richard? The same thing that makes Hull a lock to stay: goal-scoring.

In the chart below, I've listed the player with the best goals per game for each nine-year period in NHL history, as well as how far ahead of second place that player was: 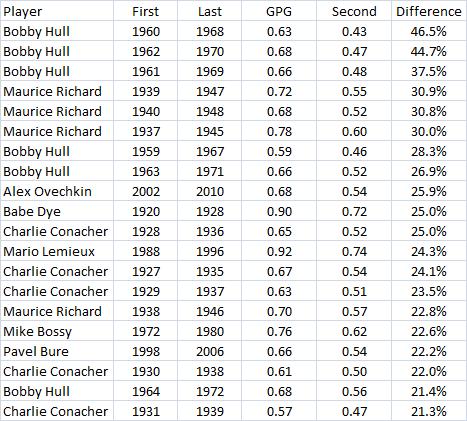 Hull is really impressive here, and in my view, clearly the best pure goal-scorer in the league's history. The way he dominated the rest of the league for an extended period of time is unmatched, and I think that should be enough to keep him safe. Richard's performance is also impressive, but given that his most dominant periods happen to coincide with the Second World War, they're not nearly as impressive as Hull's.

With just three more eliminations to go, today's article provides me with the list of guys I'll be considering each time out: Jean Beliveau, Ray Bourque, Maurice Richard, and Patrick Roy. At least one of these players is going to stay (it could be more depending on how many people agree with my assessment of the rest, and especially of Crosby), and I'm not sure which I'll be stumping to keep quite yet. As for today, Beliveau may not have anything quite as sexy as Richard's fifty goals in fifty games, but I think he has the better overall career. Same for Roy and Bourque. I think it's time to say goodbye to Maurice Richard.

That's my opinion. Voice yours by voting and in the comments below! Voting will be open until Wednesday afternoon, with the next installment coming on Thursday.