The opposing view: Matchsticks and Gasoline

The Oilers are saying:

"You don't have to chase the game, you've got the lead...once you get a couple, or three goal lead, then the team comes back a little bit, you still have the lead.  It's so important in the game"

That's Oilers Coach Dallas Eakins on why having the lead is an important part of winning hockey games.

Last pregame I was irritated with Coach Eakins' line jumbles.  Today, we at least agree on this point.  Having the lead is an important part of the game.  I hope the Oilers will get a lead and run with it tonight.  Maybe they'll have it at the end of the game, too.

"We have...certain rules in our system where pucks should be an everything, and that's one thing with Kari (Ramo) and Reto (Berra), we're working on puckhandling around the net, and like tonight, it's too bad for Kari, he's given us some big games...we opened the door, and they took advantage of it"

That's Flames coach Bob Hartley on giving up two quick goals to the Avalanche in a 3-2 loss toon Friday night.  The Flames allowed two goals in 54 seconds late in the second period, giving Colorado a 2-1 lead after 40 minutes.

Hartley's on to something here.  Bad goals at bad times can be a killer. 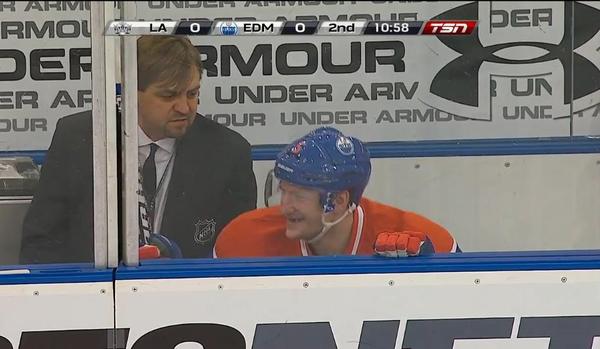