The Best Players Ever - Round of 14

Share All sharing options for: The Best Players Ever - Round of 14

We're now down to the last fourteen, which means we've got just four votes to go. As a result, I've done away with the heats, and will include all of the players in every vote from here to the finish. As always, indivdual profiles for each of today's contenders can be found at the links below:

With fourteen players still left to go, there was very little that our writers held in common. There were calls to eliminate Jean Beliveau, Sidney Crosby, Bobby Hull, Nicklas Lidstrom and Eddie Shore. This was distressing to me because I've got three of those players in my personal top ten, and because this post isn't going to be big enough to defend all of them! As such, I thought it might help to start with a broad look at which of these players was regarded as the best at his position. We can do this by looking at the players named to the First and Second All-Star since they were first selected in 1930-31:

I think this is a pretty fair look at the amount of time each of these players spent among the league's elite. The only guy with a real gripe about the fairness of this chart is Eddie Shore whose career began prior to 1930-31, but he doesn't really look out of place regardless. The three guys who do are all modern players, Sidney Crosby, Patrick Roy, and Dominik Hasek. I don't think we should eliminate any of them yet because of the answer to my next question, namely, whether or not these players were considered the best in the league. For that we can look at the number of times each player won the Hart Trophy or finished as the runner-up: 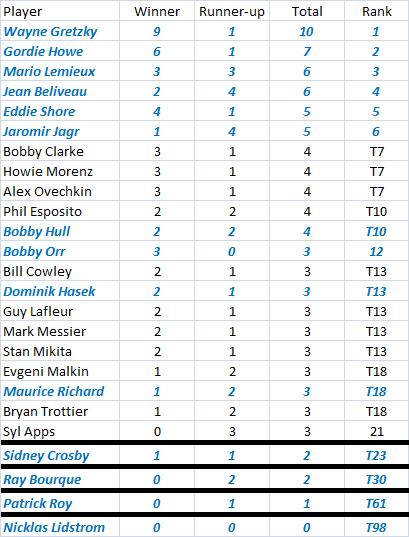 For me, this is the more important of the two charts, and the main reason that I'd advocate for voting out Lidstrom now. He was an excellent defenseman, but was never considered one of the very best players in the league. One might argue that not many defensemen were, but several other defensemen (Doug Harvey, Red Kelly, Rod Langway, Denis Potvin, Chris Pronger) received at least a single point. I argued this point last time, but when you factor in that Lidstrom would rarely have been considered the best player on his own team (Datsyuk, Fedorov, Yzerman), I think it's past time for him to go.

That's my opinion. Voice yours by voting and in the comments below! Voting will be open until Sunday afternoon, with the next installment coming on Monday.