Oilers lose 4-3 to the Flyers in the shoot out and get a point out of a game they should have lost.

Share All sharing options for: Up by 2 = Shoot Out Loss

The Oilers have had horrible results this season on the second of back-to-back games and tonight's game would be no exception. The only saving grace was the fact that the Oilers were able push the game to overtime and earn themselves a point (not that points really matter at this point but it's better than nothing).

This game was a typical second of back to back games. The Oilers started out strong on goals by Taylor Hall and Ryan Nugent-Hopkins but seemed to fall asleep after those first four minutes. The Flyers made the best of it and took control of the game from that point on.

The First Few Seconds of the Second Period

This was a brutal sequence and shows just how bad the Oilers power play zone entry is. 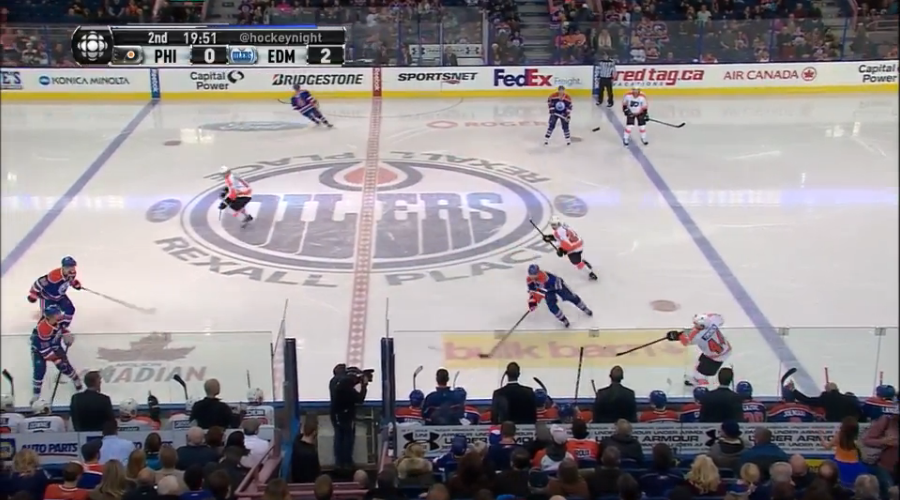 In the first screen shot Jordan Eberle tries to swipe at the puck with a wide open Sean Couturier streaking down the middle of the ice. Taylor Hall has his back turned to the play and Sam Gagner and Justin Schultz have the right side of the ice covered very well (too bad there is no one there). 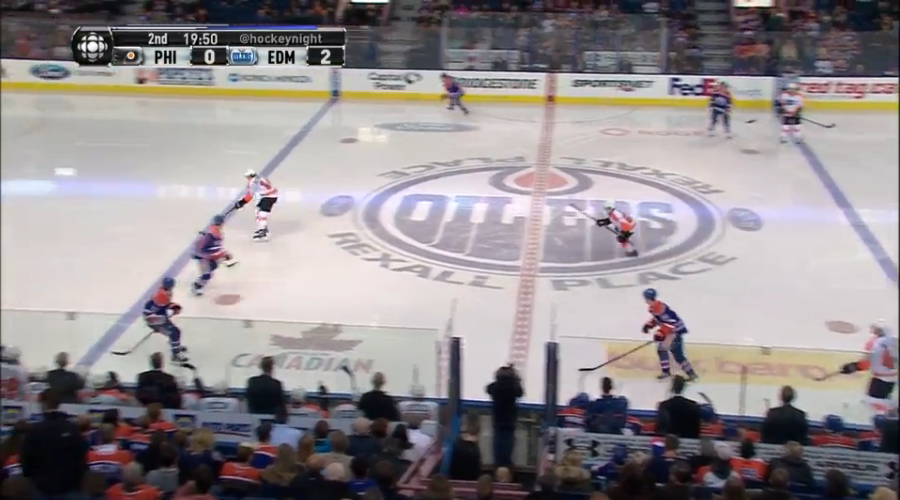 Gagner takes a step to his left but Couturier is already gone by this point. 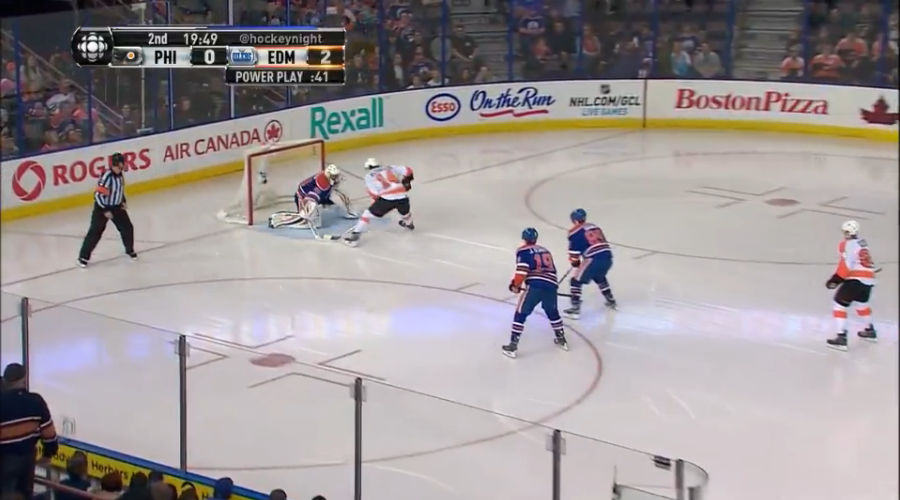 Couturier is now in all alone on Ilya Bryzgalov. Luckily Bryzgalov is able to poke check Couturier and nullify the attempt but the Flyers keep coming. 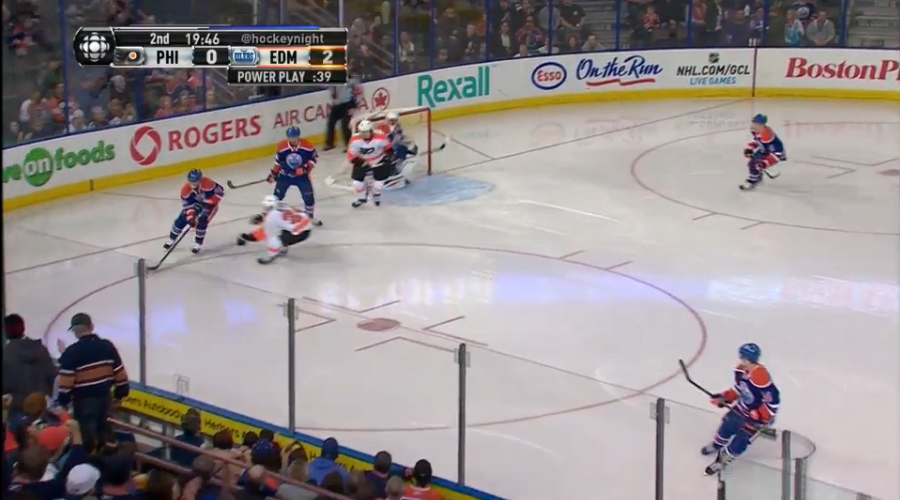 Gagner tries to clear the puck but is thwarted by Matt Read who is able to steal the puck. 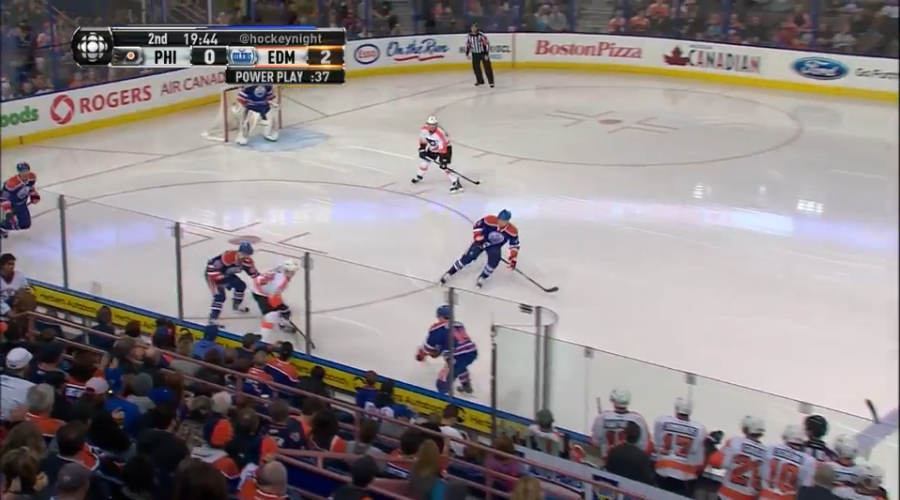 Read looks at who is covering who and notices that Couturier is wide open again, this time in the slot. 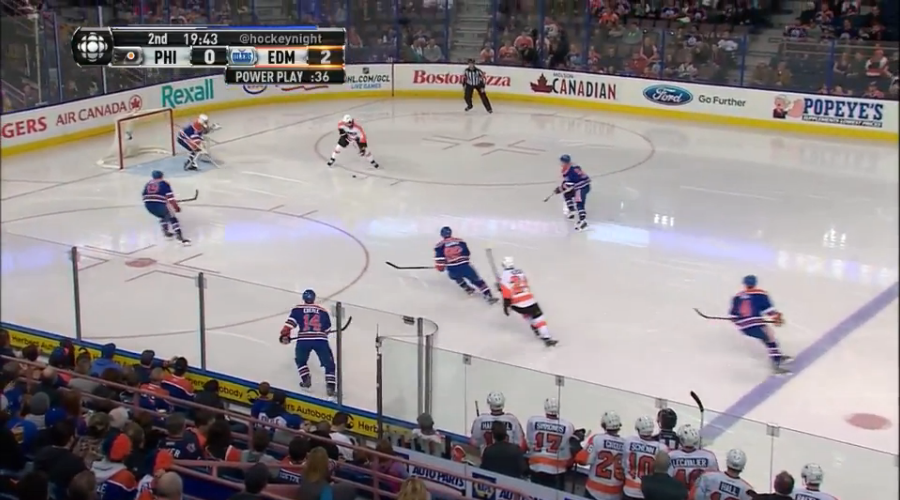 Once again Couturier is able to get a fantastic opportunity on Bryzgalov.

This entire sequence is brought to you by the Oilers power play and no one knowing who to cover when the power play breaks down. The Oilers got lucky on this play as it was probably the Flyers' best chance on net and they had a lot of chances.

Star of the Game

The honour goes to Ilya Bryzgalov. Oilers came out of this game with a point. Sure Hall, Nugent-Hopkins and David Perron scored but after going up 2-0 the Oilers fell asleep and the team suffered for it. The ONLY player that kept them in the game was Bryzgalov.