So the coach went to management and pleaded with them saying, "Please don't send us out there like this yet again. I'm being given insufficient tools, but still the fans cry out for more wins! The team is consistently beaten, but it isn't my fault! Respectfully, I must suggest that it's those providing the tools who are to blame."

But the managers shouted, "You're just lazy! The laziest head coach yet! That's why you're trying to shift blame onto others instead of figuring out how to use the gifted players we've acquired for you."

Visiting Team Scouting Report: The St. Louis Blues are very obviously one of the best teams in the NHL today, but how did they get there? I thought that it might be instructive for us to take a look at their lineup for tonight's game and determine how the Blues acquired each player who was played at least ten games for them this season: 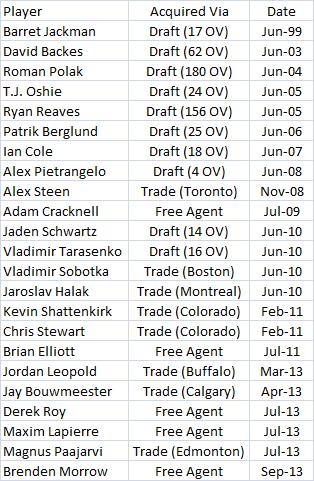 I'm struck by the number of players on this list who have been acquired via trade. I bet it isn't typical to have more players on your team acquired in that manner than by free agency, but it might be a model for the Oilers to consider.