The Best Players Ever - Round of 16 - Second Heat

Share All sharing options for: The Best Players Ever - Round of 16 - Second Heat

I was pleasantly surprised to see Phil Esposito get enough votes in the first heat of this round to be eliminated. I thought (and think) that it was the right call, but also knew that there was some chance that the vote might go another way. Today? Things should be interesting once again. Indivdual profiles for each of today's contenders can be found at the links below:

Before writing this article, I consulted with the Copper and Blue writers, and six shared their picks, with the vote being split three ways. Jacques Plante originally received four votes (Alan, DB, OilYYC, Scott) with Sidney Crosby (Ben) and Ray Bourque (Derek) each receiving one. But then I changed my mind, and shifted from Plante to Nicklas Lidstrom.

I wasn't surprised to see Crosby called out, but I was surprised to see Ray Bourque nominated. There's a strong case to be made that Bourque was never the best player in the league, but he's actually not unique in this heat in that regard; it's also true of Nicklas Lidstrom and Jacques Plante (this is the main reason I think Crosby should stick around).

The comparison is easier with Lidstrom since they played the same position, and I think Bourque comes out looking better. Bourque was the runner-up for the Hart Trophy twice (1987, 1990), which is something that Lidstrom was never able to accomplish, and while Lidstrom won two more Norris trophies, Bourque was considered one of the best defensemen in the league for a ridiculously long time. We can see this by looking at the defensemen named to the First and Second All-Star since they were first selected in 1930-31: 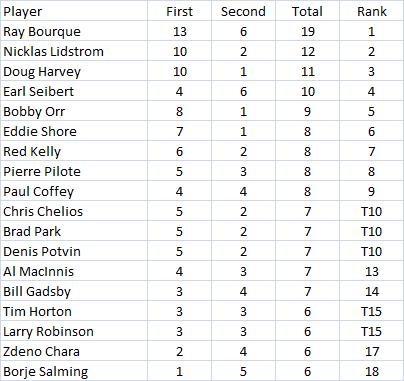 Lidstrom looks very good by this measure, but Bourque is in a class by himself. Add that to the fact that Lidstrom may not have even been considered the best player on his own team (Yzerman, Fedorov and Datsyuk would all have claims at various times), and I don't see how Lidstrom can beat Bourque if you feel a defenseman needs to go.

Then I started thinking about Jacques Plante. It seems to me that, though he may not have been the best player on his team for much of his career, he certainly was after he arrived in St. Louis. When he moved to Toronto a couple of seasons later, he had arguably his best season ever in 1970-71 at the age of 42. Plante's save percentage that year was .942, by far the best number of his career for which we have data, and still an NHL record today.

We also have save percentage data for Plante from 1954-55 to 1964-65 (Plante's time with the Canadiens and Rangers), and in those eleven seasons Plante accumulated a save percentage of .917 on 18,637 shots compared to just .900 on 4,183 shots for his teammates. Combine his record-setting save percentage accomplishment with seven First or Second All-Star appearances and his (again, record-setting) eight times leading the league in goals against average, and I think Plante is good enough to stay.

That means Lidstrom is out on my card, but that's just one opinion. Voice yours by voting and in the comments below! Voting will be open until Wednesday afternoon, with the next installment coming on Thursday.