The Best Players Ever - Round of 12

Share All sharing options for: The Best Players Ever - Round of 12

Well, Sidney Crosby was finally punted after last week's vote, and while I think that's unfortunate, I can certainly understand the sentiment that he just doesn't have a long enough track record to make it all the way into the top ten. Equally interesting from last week's vote were the other players: seven players received less than 5% of the vote, and five others received 10% or more. If that trend holds, we've got seven players whose spots are nearly guaranteed (Gretzky, Hasek, Howe, Hull, Jagr, Lemieux, Orr) and five others fighting for three spots (Beliveau, Bourque, Richard, Roy, Shore). As always, indivdual profiles for each of today's contenders can be found at the links below:

I was stumping for Richard to be eliminated last time, but I'm much more nervous today about whether or not that's the right call. One of the main points I used last time was that his points per game weren't at the same level as the other forwards still alive in this tournament. To refresh your memory, the chart below normalizes each forward's points per game to a league in which six goals are scored per game, and will look at performance from age 22 to age 39 (seasons in which a player played less than 30 games are highlighted in blue, the best points per game in the group is highlighted in green, and the worst in the group is highlighted in red): 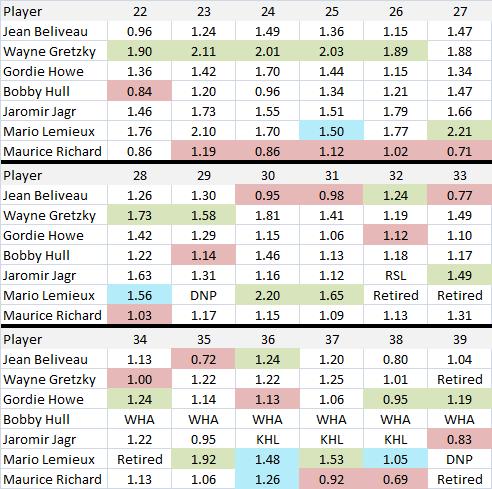 Gretzky and Lemieux are clearly the class of the group, with Gretzky's 20s and Lemieux's 30s being particularly impressive. Richard just looks a bit out of place. He has the worst adjusted points per game in eight of the seventeen seasons he qualified for. No one else is close to that kind of track record (Hull is worst in 2 of 12, Beliveau in 4 of 18). But what if we measured goal-scoring? How much better does Richard look? 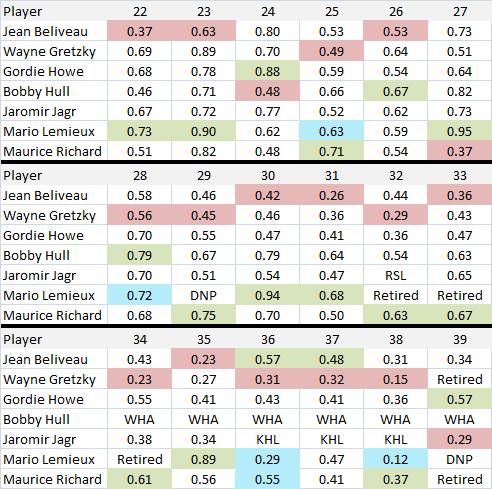 As for today's vote, this information might leave Beliveau a little bit more vulnerable since he's the only player to have more "worsts" than "bests" in both goals per game and points per game when compared to the entire group of forwards. What keeps him alive for me is the fact that he seems to have been considered the best player in the league for a longer period of time than Richard at a time when the competition for "top player" was tougher. The chart below show how many times each of the players under consideration won the Hart Trophy and how many times they finished as runner-up: 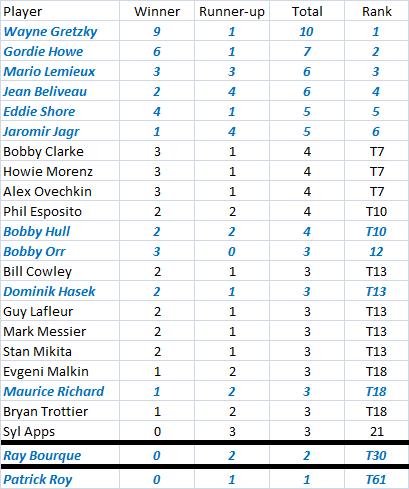 In the seasons Richard placed, the winner/runner-up was Elmer Lach or Milt Schmidt, neither of whom made the original 32 in this tournament. In the seasons Beliveau placed, the winner/runner-up was Phil Esposito, Stan Mikita, Bobby Hull, Gordie Howe or Tod Sloan, four of whom were in this tournament, and two of whom are still alive now. I do think that, if we're voting out a forward, it comes down to Beliveau or Richard, and to me, Richard takes it.

The other option, of course, is to vote out a defenseman or a goaltender, and in my view, it's pretty clear that means either Ray Bourque or Patrick Roy. Eddie Shore got a relatively large share of the vote last time out, but he really shouldn't. He's an excellent representative of the league during his era, and as you can see in the chart above, is definitely not out of place when we're talking about the game's greats. Bourque's longevity is truly marvelous. No one has more First Team All-Star appearances and only Gordie Howe has more First or Second Team All-Star appearances. No one else is all that close to them: 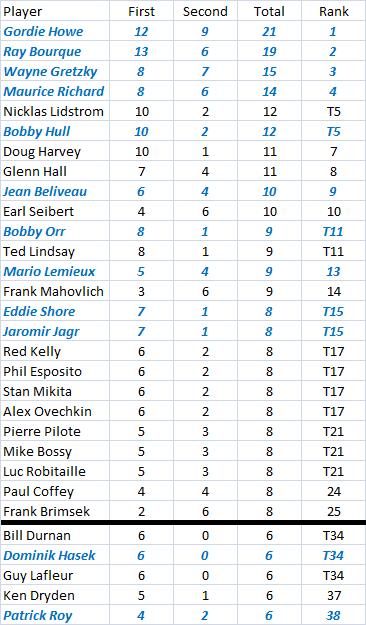 Which leaves Patrick Roy. He's the only player in history with three Conn Smythe trophies, and his impact on the game isn't in doubt. I've said it before, but not for a while, so I'll say it again now: Patrick Roy faced 28,353 shots during the regular season and stopped 25,807; an average goaltender would have stopped 25,376 over that time period for a difference of 431 goals, or about 23.9 better than average (not replacement level) per season over eighteen seasons. Was Bourque worth 24 goals more than the average defenseman for that long? Richard and Beliveau more than the average forward? It's a tough question.

At any rate, it seems to me that any of Beliveau, Bourque, Richard, or Roy could be going home today. I'll be casting my vote for Richard, but am really looking forward to seeing how this shakes out. Voice your opinion by voting and in the comments below! Voting will be open until Sunday afternoon, with the final vote coming on Monday.