Ference & Smid Go After The Slackers

Share All sharing options for: Ference & Smid Go After The Slackers

Ladislav Smid and Andrew Ference aren't happy and they're not staying quiet any more. Smid was the more pointed of the two, saying:

Consider the multitude of mistake-makers on alert. Smid's standing as a top-pairing guy lends some credibility to his comments. He's facing the second-toughest competition and toughest zonestarts amongst Oilers' defensemen, and while he's not coming out ahead, his on-ice results haven't been as bad as some of his other colleagues on defense.

Speaking of Andrew Ference, he may want to tread carefully. Ference is facing the third-toughest competition and sits smack in the middle of the zonestart standings, yet has delivered the worst adjusted results of all Oilers' defensemen. Ference has had the unenviable task of babysitting Justin Schultz, who finds defense below the faceoff dots a nightly adventure, so that may play into his results, but Ference was brought in for toughness, solid in-zone defense and leadership. He's not delivering. So when he says:

It’s like nothing soaked in. We have to hold each other accountable because there’s no excuse for it. 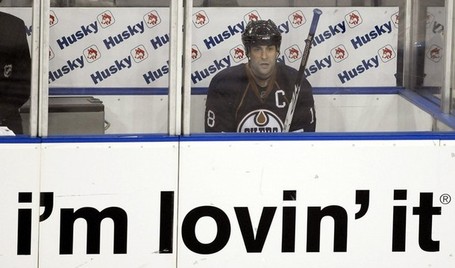 ...he should realize that the last Oilers' Captain to light into his teammates without delivering results was waived the following off-season. Ethan Moreau's lack of insight into his own failings, coupled with his tendency to trash his teammates four seasons ago signaled the beginning of the end of Moreau's time with the Oilers:

If Ference is going to name names publicly, or point fingers in the locker room, he should start with an admission of his own early-season mishaps. If not, he risks alienating his teammates and forcing management to step in. If I were him, I wouldn't want a management team picking between a 34-year-old second-pairing defenseman and a locker-room full of first round draft picks on long term contracts.