The Best Players Ever - Round of 24 - Second Heat

Share All sharing options for: The Best Players Ever - Round of 24 - Second Heat

The first heat in the round of 24 finished with Bobby Clarke being eliminated in a vote that saw both Howie Morenz and Cyclone Taylor survive to represent the first few decades of hockey in the top twenty. The second heat is quite wide open, and I'm not at all sure of which of these six contenders is going to be eliminated. Today's heat includes Bobby Orr, Doug Harvey, Bobby Hull, Jaromir Jagr, Nicklas Lidstrom, and Alex Ovechkin with individual profiles for each player found in the links below:

In the last article for this series, I looked at point-scoring and goal-scoring among forwards, giving five marks for leading the league in goals or points, four marks for finishing second, three marks for third, two for fourth, and one for fifth, dividing the league's history into ten overlapping thirteen-season segments. That list left me much more impressed with Alex Ovechkin's performance than I had been previously, and is one of the main reasons I can't stump for his elimination here. Despite coming into the league in 2005-06, Ovechkin finished second using this system for the 1997-2010 segment and is currently in first place for the 2007-Present segment. When we look at the history of the league, Ovechkin has the thirteenth-highest score, and still has a few years of his prime to go. He also has some of the very best adjusted goals per game seasons in the history of the league. It's just not time for him to go.

But if not Ovechkin, then who? Five of us settled on Doug Harvey. In the chart below, I've once again broken the history of the NHL into ten overlapping thirteen-season segments, and have awarded marks to defensemen based on where they finished in a particular season with regard to points. A player received five marks for leading the league in points by a defenseman, four marks for finishing second, three marks for third, two for fourth, and one for fifth. The results are below with players still in the field of 24 in blue: 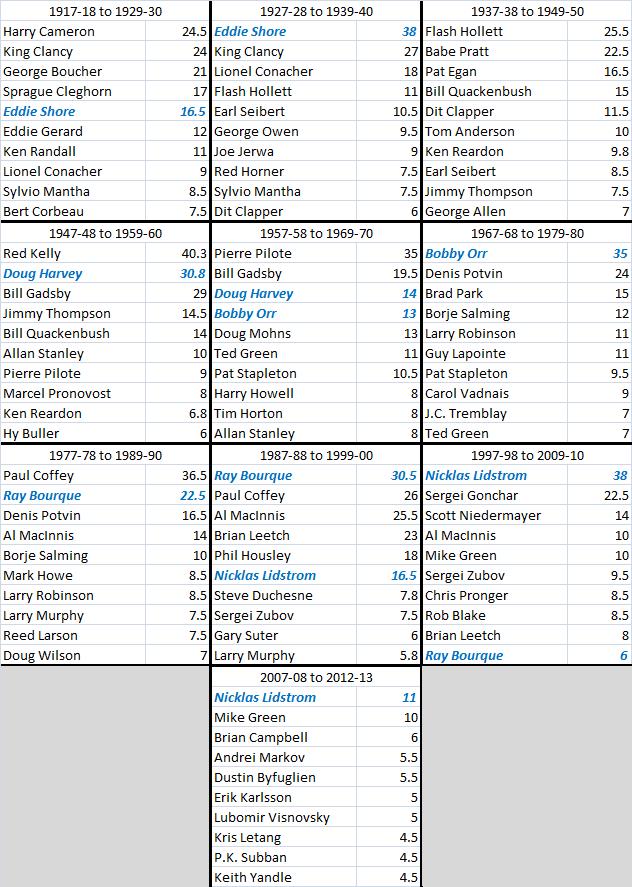 Harvey shows reasonably well here, but unlike Orr and Lidstrom, he doesn't lead the league in any one segment, and his best segment sees another player, Red Kelly, outshine him offensively. For me, that's a big red flag. I recognize that producing offense isn't the first job for a defender, but when we're talking about the best players of all-time, it seems to me that any defenseman needs to be the best option in all situations for his era. I'm not sure that was true of Harvey.

Since I know folks will want to look at the highest totals across eras, here are the fourteen best totals including all seasons: 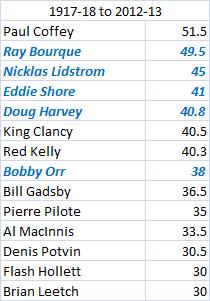 It's an interesting list. I was actually pretty shocked to see Paul Coffey at the top. I don't think he was a better player than Bourque offensively (Coffey played with some pretty ridiculous talent over his career), but that's still a very impressive sustain. Bobby Orr is below the other contenders, as expected, but the individual seasons in which he earned points are clearly some of the best ever. Harvey looks surprisingly good here, coming in just a hair in front of Red Kelly offensively, and with seven Norris trophies, clearly recognized as the best overall defenseman of his era. For me, his accomplishments are still the least impressive of this heat, but that's just my opinion. Voice yours by voting and in the comments below!