Are the Oilers Taking Too Many Shots From the Perimeter?

Michael Parkatti is doing some terrific work on shot distance at Boys on the Bus. We take a look at some of the early returns.

Share All sharing options for: Are the Oilers Taking Too Many Shots From the Perimeter?

One of the topics that is consistently getting discussed among Oiler fans is that the Edmonton Oilers need to get bigger and tougher. Grittitude as Ryan Batty likes to call it. I'm not a believer in that, but I do think there is something to having an excess number of players that all play a similar style and try to score using the same tactics.

Michael Parkatti has an excellent analytical mind for hockey. If you don't read his Boys On The Bus blog, or his semi-regular articles posted here at Copper & Blue, you really should. Michael won the Oilers Hackathon contest for statistical analysis last year and has been doing the breakdown of corsi events that are linked to in all of our post-game articles.

Over the last few weeks, Michael has been adding a new element to his game breakdowns. Shot distance. It is a commonly held believe in the analytics community that the effects of shot quality are not a significant determining factor in a teams ability to win and that wins are more heavily determined by a team's ability to control possession, their special teams and goaltending as well as flat out luck.

I tend to agree with the sentiment, but I also think that the analytics community has not yet found an accurate way to gauge shot quality and all of the variables that go into it. Player skill (accuracy, power, release), positioning of the other players on the ice (on both teams), the goaltender's visibility, puck movement, the shooter's skating speed, shot velocity, game situation and proximity to the net all have an impact on how likely an individual shot attempt is to reach the back of the net. As it currently stands, there's no stat available that can consolidate all of these factors to properly quantify the likelihood of a shot to result in a goal.

However, people like Parkatti and Eyes on the Prize's Chris Boyle (who is writing a series called "The Shot Quality Project" for Sportnet.ca) are trying to start the process of changing that. Michael's work on shot distance is in its infancy, but it is already producing some very interesting information.

Parkatti only began making shot distance data available on a per game basis beginning with the game in Montreal on October 22nd, but he did provide a "season-to-date" consolidated total for the games that had taken place previous to that date this season. Below, I will discuss some of the preliminary data for the Oilers and, with the caveat of small sample size, see what we can discern regarding the play of the Oilers in the first month of the season.

What is a Reasonable Average Shooting Distance?

According to Parkatti's research, the threshold at which shot distances are converted into goals at a pace consistent with a league average shooting percentage lies somewhere around 27 ft. For his research, he has focused on a distance of 25 feet or less as a distance he feels to be a significant scoring threat. If I interpret the many graphs in the post linked above correctly, approximately 7% of all unblocked shot attempts throughout the league over the last three seasons have resulted in goals. That percentage grows to 8.7% once you get inside 20 ft. So, the question is then, how are the Oilers performing this season in this area?

Not as Bad as You Think

Going back through historical data, shot distance for forwards who average over 10 minutes of 5v5 ice-time per game typically comes in somewhere between 29 and 30 feet on a league wide basis each season. That is a couple of feet outside of Michael's target range, but it has been very consistent every year going back to 2008/09, so in order to determine if the Oilers are performing better or worse than other teams, it makes sense to compare them to historical averages. 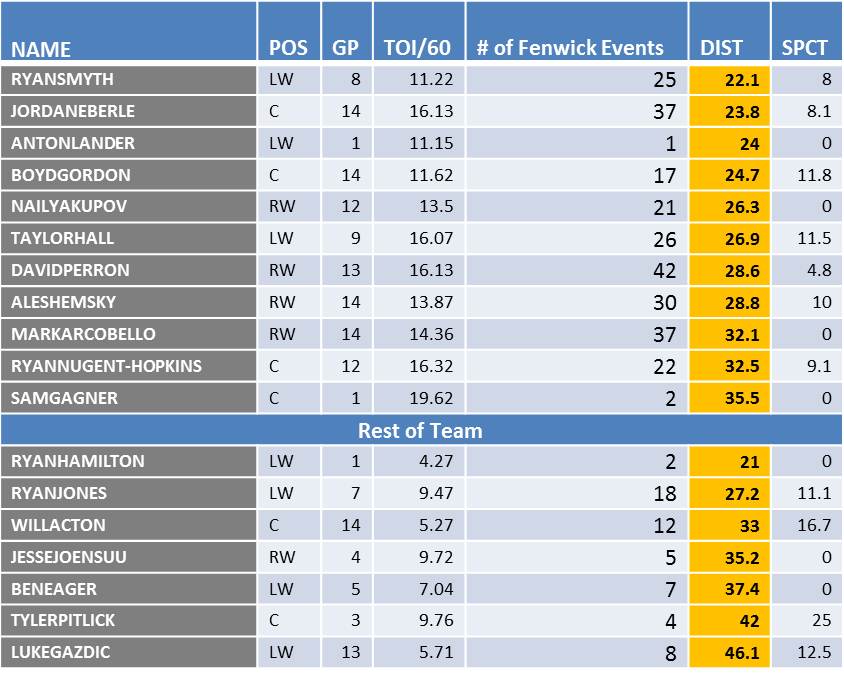 The chart above utilizes numbers from behindthenet.ca, and for the most part appears consistent with Michael's work. There are some obvious differences in the data, such as Jesse Joensuu's information, which is drastically different between the two sites and bring up a valid point that accuracy of shot data is an ongoing concern with analyses like this.

Still, going off of the information we have, we see that the Oilers forwards, particularly their skill forwards are right in line with league averages if not slightly better in some cases. This would seem to contradict the commonly held belief that the Oilers are a team of outside shooters.

While the Oilers forwards are in line with the rest of the league on the season, my personal observation is that the team suffered from poor goaltending in the first two weeks and lost a few games where they played well. However, in this current five game losing streak, I haven't felt the team played as well, and even though they received vastly improved goaltending, they were still coming up short on the scoreboard. Let's see if anything stands out when we isolate the games on this current losing skid: 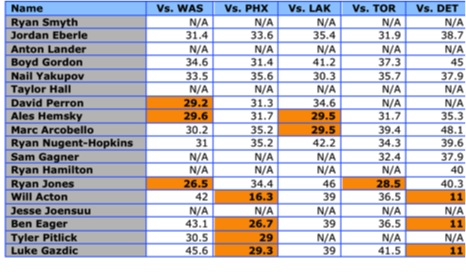 As you can see, I've highlighted any instance where a player's average shot distance drops below 30 ft. You'll notice a severe lack of highlighted numbers among the skill players, and even when a skill player did crack the sub-30 barrier, it has always been within a single foot. Ryan Jones actually deserves some credit here as the one person who has penetrated the primary scoring areas with even a little frequency in recent games. The highlighted entries for the 4th line, while nice, are skewed by a lack of fenwick events, for instance, in the Detroit game, they only had one, which happened to be close to the net, so of course the average looks great.

The data from the current losing streak does seem to suggest that as a forward group, the Oilers have had more difficulty getting into decent shooting positions over this most recent losing skid. The variance for players like Perron and Hemsky aren't drastic and could just be simply game-to-game variance, but some of the young players such as Yakupov and Eberle have really struggled at getting close to the net recently.

Overall, there is a noticeable trend collectively over this period. This could be the result of injuries to players like Hall and Smyth, who tend to drive the net with more frequency, or it could be the defensive play of their opponents. The sample size is so small that it is difficult to isolate a cause, but it is evident that the team's offensive struggles over this streak (other than the PHX game) could stem from difficulties penetrating the offensive zone, particularly on the top line, upon which they rely so heavily.

So They Aren't a Perimeter Team?

I can't say for sure yet. What we can see is that, based on historical league averages, the Oilers' forward group aren't being forced to shoot from a further distance than other teams. A hypothesis of mine that I will be looking into in the next little while is that the Oilers troubles could stem from being a team that does not have an established net presence, which would affect the opposing goaltender's visibility and increase the likelihood of generating second shot attempts as part of the same sequence of events through rebounds, etc. I actually think that may be a more significant source of the team's difficulties. I'm interested to see if we can see a statistical method of proving or disproving that theory.

I think that my suggested theory would jive with what many people are observing, and would be part of the reason the media and fans are always calling for size in the top six. It's not size that is needed, it's just a willingness and ability to get close to the net and stay there. Michael's work clearly shows that teams that are able to consistently recover the puck/generate fenwick events in close proximity to the goal are likely to score goals with a much higher frequency. In the league today, you don't need to be 6'4" 220 lbs to make that happen, but right now the Oilers don't have anyone beyond Smyth who makes parking himself out front and creating traffic a big part of their offensive game.

There's probably not a great deal in the theory offered above that anyone would consider groundbreaking, but it is a slightly more defined theory than saying the Oiler forwards are simply too small and being forced to shoot from the further away from the net than their opposition. The fact is, that is just not the case.

More from The Copper & Blue: