The Best Players Ever - Round of 16 - First Heat

Share All sharing options for: The Best Players Ever - Round of 16 - First Heat

With just six more eliminations to go, the votes are only get tougher. After successfully avoiding elimination in the last round, Eddie Shore is back at it again today against seven others. Will he be able to survive again? I certainly hope so. Indivdual profiles for each of today's contenders can be found at the links below:

Before writing this article, I consulted with the Copper and Blue writers, and six shared their picks, with the vote being split five ways. Phil Esposito (Alan, Scott) and Jean Beliveau (Ben, Derek) each received two votes, while Eddie Shore (OilYYC) and Bobby Hull (DB) each picked up one.

I wasn't surprised that Shore got a vote from one of the writers, but I've still got him ahead of at least three other players in this heat. With some of the other defensemen left--Nicklas Lidstrom and Ray Bourque are in the other heat--I think it's clear that they were the best defensemen of their respective eras, but that very few would argue for them as the best player. In Shore's case, I think you can argue that he was the best player. I argued at length for voters not to eliminate him in the last round, so I'll be brief here: Eddie Shore is one of just three players in the history of the NHL to win the Hart Trophy at least four times (the others are Gretzky and Howe), and one of just two defensemen to win it more than once (the other is Orr). He absolutely shouldn't be eliminated here.

And neither should Bobby Hull. In the chart below, I've listed the player with the best goals per game for each nine-year period in NHL history, as well as how far ahead of second place that player was:

Bobby Hull is absolutely dominant here. The three largest gaps between first and second (and five of the top eight) belong to Bobby Hull. He is clearly the best goalscorer of his era, and easily one of the most dominant (if not the most dominant) goalscorer in the history of the NHL. He is completely deserving of a place in the top ten based on his on-ice accomplishments, but the fact that he changed the game on the business side when he decided to jump to the WHA plays into my decision to keep him as well.

That leaves two more players who received votes from our writers in Phil Esposito and Jean Beliveau. Both players have excellent numbers, as you can see in the chart above, but I think Beliveau is just a little bit better, mostly because I think Esposito benefited tremendously from having Bobby Orr in his prime. If we exclude Orr's prime from Esposito's totals, he still looks excellent, but not quite as good as you'd hope for a player who's being discussed as one of the top ten players ever. For instance, let's look at the best players ever by raw points per game from age 22 to age 26 (i.e. the period Esposito played before Orr's prime): 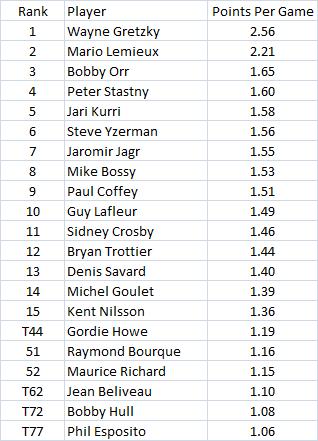 The era bias is strong, but even compared to some of the other players in the tournament who played in lower scoring eras, Esposito just doesn't stand out. And what about his performance from age 33 to 38 (i.e. the period after Orr's prime)? It's better, but nothing that would send him past Beliveau: 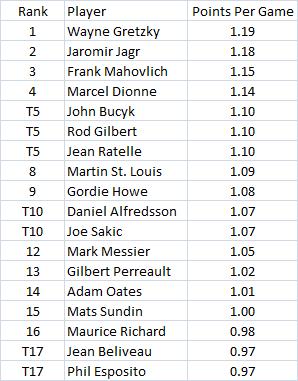 I think the picture this paints is fair. Phil Esposito was a great player, but there's a reason that he won most of his accolades when Orr was playing behind him. Bobby Orr was a generational talent, and he brought Phil Esposito to a higher level, one that he wouldn't have reached even if he was playing with other very good players. His accomplishments without Orr just don't stand out enough from the crowd to warrant his moving on past this round.

That's my opinion. Voice yours by voting and in the comments below! Voting will be open until Sunday afternoon, with the next installment coming on Monday.