The Best Players Ever - Round of 20 - Second Heat

Share All sharing options for: The Best Players Ever - Round of 20 - Second Heat

I feel betrayed. For the first time in a few weeks, voters and I had a difference of opinion, although it's actually the same difference of opinion we've had many times in this process. I again preferred to give the benefit of the doubt to one of the game's pioneers, but the hoi polloi decided that one of the game's best in the modern era deserved to stay instead, and so Alex Ovechkin survived one more vote, and Cyclone Taylor was sent packing.

There's just one more heat in the round of 20 (six players were given a bye), and the vote promises to be a close one. Indivdual profiles for each of today's contenders can be found at the links below:

Before writing this article, I consulted with the Copper and Blue writers, and five shared their picks, with the vote being split four ways. Mike Bossy received three votes (Chappy, Derek, Scott) while Sidney Crosby (Ben), Jean Beliveau (OilYYC), and Bobby Hull (Alan) each picked up one. I think that frames the issue quite well. Dominik Hasek is probably the best goalie ever, Eddie Shore is a defenseman with four Hart Trophies, and I wrote at length about why Jacques Plante deserved to stick around when his name came up in the last round. Those three players didn't receive any votes, and they should probably be safe.

That leaves four forwards, one of whom should definitely be free and clear. Bobby Hull was a First or Second Team All-Star twelve times during his NHL career and another five times in the WHA, his league of choice at age 33 and beyond. He is clearly one of hockey's greatest goalscorers (no one led the league in goals more often), and I can't see any reason to have in the discussion for elimination.

That leaves Beliveau, Bossy, and Crosby. and I think it might be instructive to look at the (NHL) First and Second Team All-Star appearances of each player, and where that leaves them on the all-time list among forwards: 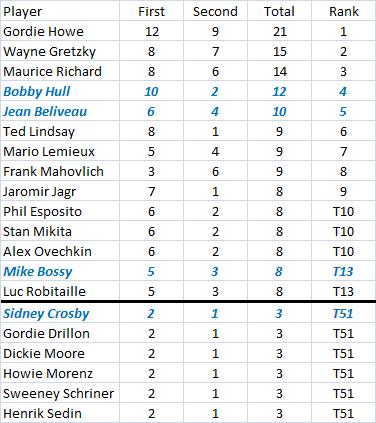 Hull is fourth all-time, which should, I think, cement his place in the next round. Jean Beliveau also looks very good by this measure, and with two Hart Trophies to his name (compared to one for Crosby and none for Bossy), I don't see him as a strong candidate for elimination either.

That leaves the decision between Mike Bossy and Sidney Crosby, and I think either choice is pretty reasonable. Crosby hasn't been healthy enough to earn the kind of accolades that almost every other player left in this tournament has, but when he's been healthy, he's been amazing. In the chart below, I've listed the player with the best points per game for each nine-year period in NHL history, as well as how far ahead of second place that player was:

It's a really interesting list for several reasons (Bill Cowley dominating the Maurice Richard era, Bobby Orr taking a few years on the chart as a defenseman, Jean Beliveau being competitive with Gordie Howe), one of which is the reason I think it makes sense to keep Crosby over Bossy, namely that Crosby's most recent period makes him one of the more dominant players on this list. The only players further ahead of second than Crosby over one of these nine-year stretches are Wayne Gretzky, Mario Lemieux, Charlie Conacher, and Bill Cowley. Now, Conacher and Cowley have both been eliminated already, so I guess there's precedent for turfing guys like this, but both of those players were in very different situations. Conacher played in the in the 1930s when hockey was still getting established (which probably hurt him in voting), and Cowley had his best seasons during the Second World War. Crosby, by contrast, plays during the most competitive era of the game's history.

That leaves Bossy getting eliminated on my card, but as always, voice your opinion by voting and in the comments below! Voting will be open until Wednesday afternoon, with the next installment coming on Thursday.