How Bad Have The Oilers Been?

Compared to the Oilers squads of past seasons, how bad have they been this year?

Share All sharing options for: How Bad Have The Oilers Been?

As the fans were funneling out of Rexall last night, after yet another loss which leaves the team with a depressing 4-14-2 and an active streak of 182:04 minutes played at home without a goal (amazingly that's not a team record), I heard more than a few people say that this is as bad as the Oilers have ever been. While I will certainly agree that the Oilers have been terrible in more ways than I care to count through the season's first 20 games, worst ever is quite a claim. After all this is a team that just recently finished dead last twice. And let's not forget the 2007 Death March*. These Oilers are very bad but is this really the worst we've ever seen?

Using shrpsports.com I went right back to the beginning of the Oilers franchise - which is of course the 1972/73 season - and determined the team's 20 game rolling points total. To get as much of an apples to apples comparison as possible I adjusted the most recent seasons to account for the Bettman point and the shootout. If a game went to a shootout I called the game a tie, and if the Oilers lost in overtime it counts as a loss. This isn't perfect because the NHL didn't play overtime until the Oilers fifth season in the league but I think it's close enough.

After 3192 games the Oilers rolling 20 game totals look like this (click to enlarge). The red line represents eight points which is the Oilers total this season when you adjust the results as explained above. 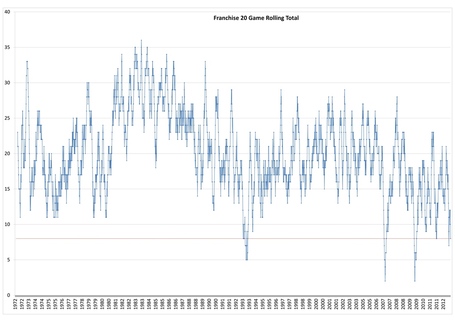 Looking at that graph I come to two conclusions. First, I will probably never cease to be amazed by the Oilers of the early to mid 80s. Second, these last 20 games have been pretty damn bad. The good news is that this isn't the worst the worst 20 game stretch in Oilers history but it's in the ballpark. The franchise low is actually two points, a mark "achieved" first in April 2007 when the original Death March was mercifully close to an end, and then again in January 2010 around the time Rebuild 2.0 was announced. 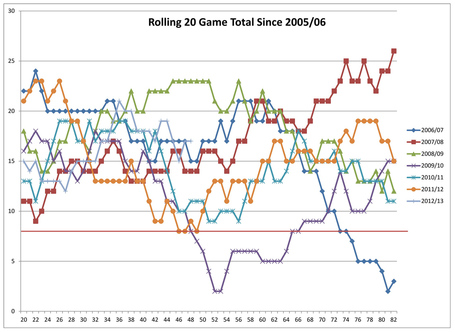 I've had trouble understanding why so many fans seem to be taking these losses harder than they have in the past, this graph goes a long way towards explaining that. The last seven years have not been a lot of fun in Edmonton, but as bad as the team has been they've rarely been this bad, and they've never gotten here so quickly. Add in the seven years of futility and the preseason expectation that the eternal losing was soon to be a thing of the past and it's fairly obvious why fans are reacting the way they are.

In the months before the Oilers finished last for the first time the team spent 19 games at or below the eight point mark. I really don't think this team is as bad as that version, and I still think that we'll see a rebound sometime very soon, but I feel like I've seen this movie before.

*The Death March started immediately after I returned for my honeymoon. I assume this is just a coincidence and not a sign that I should not have gotten married.