Best Players Ever - Round of 20 - First Heat

Share All sharing options for: Best Players Ever - Round of 20 - First Heat

After four more players were eliminated in the round of 24, we're down to our top twenty, and I think it's a pretty good list. Some will argue that a couple of names don't deserve to be here, but all of these guys have now survived at least three eliminations, so most of the chaff has been shown the door. In this round, we'll cull the herd further by giving the six players with the least votes (Howe, Orr, Esposito, Lemieux, Gretzky, and Richard) a bye into the next round and breaking the rest into two seven-player heats.

As players are eliminated, it's getting harder and harder to come to any sort of consensus about which player should go, and I expect today's first heat to be very close indeed. Our seven contenders are Ray Bourque, Jaromir Jagr, Nicklas Lidstrom, Howie Morenz, Alex Ovechkin, Patrick Roy, and Cyclone Taylor. Indivdual profiles for each player can be found at the links below:

Before writing this post, I consulted with the Copper and Blue writers, and five shared their picks, with the vote being split four ways. Only Alex Ovechkin received two votes (Ben, Scott), but Howie Morenz (OilYYC), Cyclone Taylor (Alan), and Patrick Roy (Derek) each received one, which theoretically leaves Jaromir Jagr, Ray Bourque, and Nicklas Lidstrom safe (I'm no so sure that's how it will turn out).

I think Roy should be safe too based on the impact he had on his team's goal differential: Roy stopped 431 goals more than average during the regular season over the course of his career and had an above average save percentage in all of his eighteen seasons. He's also a legendary playoff performer, the only player in history to win the Conn Smythe trophy three times. He wasn't the dominant goaltender of the Hasek-era (because Hasek), but he did make was named a First or Second Team All-Star for five consecutive seasons from 1987-88 to 1991-92.

Did the other three players have the same kind of impact? Probably so, and that's what makes this vote so difficult. Referencing our handy-dandy chart that shows a tally of marks awarded based on offensive performance (a player received five marks for leading the league in goals during a particular season, four marks for finishing second, three marks for third, two for fourth, and one for fifth; I did the same with points and added the totals), we can see that Ovechkin and Morenz are right on top of one another: 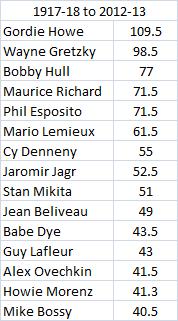 Ovechkin achieved his totals in fewer seasons than Morenz, and is unquestionably the best goalscorer of his era. From 2005-06 until today, Ovechkin has earned 0.62 goals per game, a small jump in front of second-place Steven Stamkos, who sits at 0.57. Ovechkin is also second to Sidney Crosby in points per game (1.41 to 1.22) over the same period. It's Crosby's presence that really pulls me away from Ovechkin though. Crosby has so much more value in the other parts of the game that it's hard for me to think of Ovechkin as the best forward of his era. He's won three Hart trophies in part because Crosby has suffered so many injuries during his career, making it hard for voters to reward him as the best player in a single season. But does that make Ovechkin the better player overall? I don't think so, and I think it's a pretty big strike against him now that we're down to the top twenty players.

Morenz, on the other hand, seems to have been the best player of his era. Morenz's best nine-season stretch (to match Ovechkin's nine-year career) was from 1924-25 to 1932-33, and over that period Morenz led the league in both points per game (0.98) and goals per game (0.63). It was his consistency that led to those league-leading numbers as only one of his individual seasons (1927-28) is really dominant relative to his peers. He led the league in goals only once (1927-28) and in points just twice (1927-28 and 1930-31), but he picked up the Hart Trophy three times, and a 1950 Canadian Press poll named him the best player of hockey's first half-century. For me, it's important to honor that first part of hockey's history, and Morenz is probably the best candidate for that.

The next best candidate? Either Newsy Lalonde (who was already eliminated) or Cyclone Taylor. A lot of how you rate Taylor rides on how you view pre-NHL hockey. I think that era of hockey history is important, and that the best players of that era should be acknowledged alongside the best players from other eras. That being the case, Taylor can't be ignored. In 1910, when hockey was just in its infancy, Taylor was the highest-paid Canadian athlete period, which at least suggests that he was regarded as among the best, if not the best player in the world at the time. He arrived in the Pacific Coast Hockey Association in 1912-13 and finished as the league's all-time leader in points per game (1.95, second place with 1.41), and goals per game (1.19, second place with 0.95). Some would denigrate his achievements because they didn't occur in the NHA or NHL, but players frequently moved from one league to the other and the champions of both leagues often competed for the Stanley Cup. In other words, the two leagues were roughly equivalent to one another, and Taylor's achievements there are truly remarkable.

So who gets the vote? Well, I picked Ovechkin, but I can see it going any number of ways. Voice your opinion by voting and in the comments below! Voting will be open until Sunday afternoon, with the next installment coming on Monday.