Was Sam Gagner simply being lazy on the Leafs' second goal? The play deserves a closer look.

Sam Gagner retured to the lineup for the Oilers against the Maple Leafs on October 29th. He missed the Oilers' first 13 games because of a broken jaw and subsequent, but was in the gym shortly after surgery and skated with the team for more than a week prior to his return. His return was inglorious: we was -3 on the night when the Oilers gave up only 4 goals. And for his performance on Toronto's second goal, fans and sportswriters called him "lazy" and said he was "floating" and "pulled the chute". The replay is below, Gagner is the Oiler gliding on his skates behind James Van Riemsdyk as the goal is scored.

But is it simply a matter of Gagner coasting, refusing to put the effort into a solid backcheck, one that might have prevented the goal, or was there a reason Gagner couldn't get to Van Riemsdyk? To find out, I fired up Gamecenter Live and watched the sequence repeatedly.

Gagner, Jordan Eberle and Nail Yakupov started their at 19:11, following a shift by the Nugent-Hopkins line. They got a stoppage by Devan Dubnyk at 19:04 for a faceoff in the defensive zone. Anton Belov and Justin Schultz joined them for a shift against Nazem Kadri, Phil Kessel, Van Riemsdyk, Dion Phaneuf and Carl Gunnarson. The Oilers had a wonderful chance to score, but Justin Schultz missed the net and the play went the other way, ending the shift ended 52 seconds later with the Van Riemsdyk goal. Now for the screenshots. 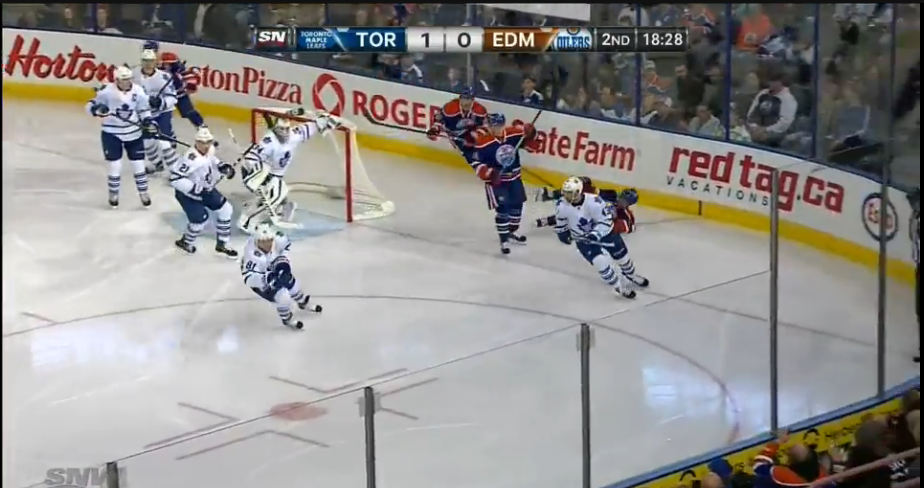 The first shot was taken directly after Schultz pinched for the chance, sending the puck high and wide around around to the boards on the Oilers right side. In this shot, you can see Schultz laying on the ice, Nail Yakupov standing on the goal line between the goal and Nazem Kadri, Jordan Eberle is on the far side turning after the miss and Sam Gagner has, before everyone else in the picture, recognized the chance the other way - he is taking is first step from the end boards, just in front of the 's' in Rogers. Anton Belov is the only man back.

Here you can see Phil Kessel with his eyes on the puck, ready to make his breakout and both Van Riemdsyk and Kadri starting up the ice. On to the next. 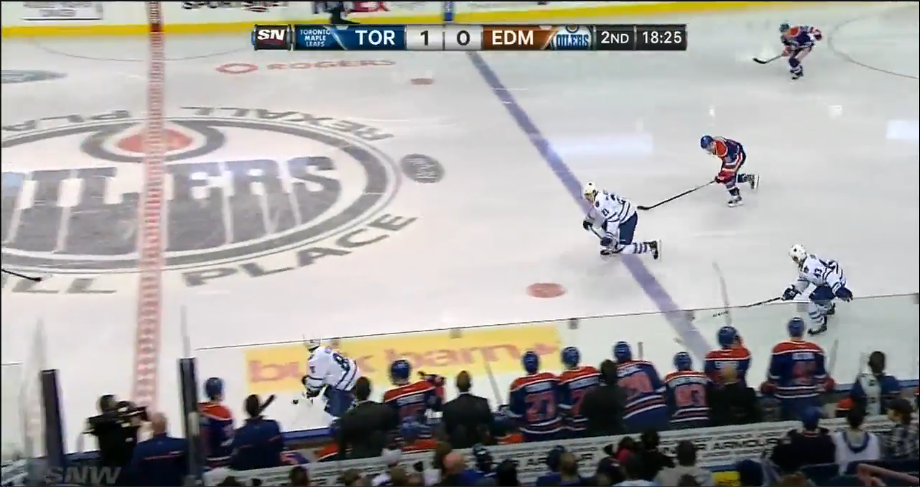 Three seconds later Kessel is charging up the left side of the ice with the puck, supported by Van Riemsdyk against Anton Belov, the only man back - you can see his stick on the left edge of the picture. By this time, Gagner made up Kadri's 11 foot headstart and is bearing down on Van Riemsdyk. Nail Yakupov is not in the shot and Jordan Eberle is lagging behind at the top right of the screen. Gagner covered ~65 feet to Eberle's ~50. 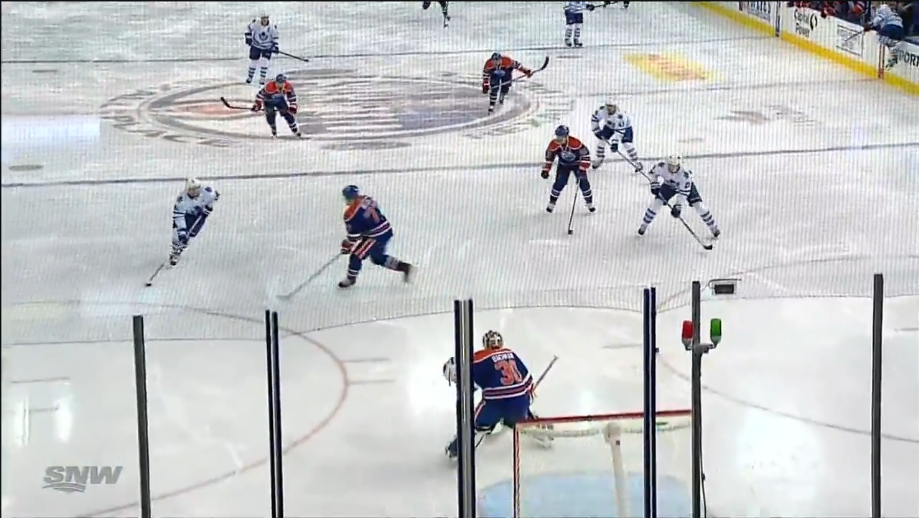 Here is the goal view of the end stages of the sequence. Gagner (and Eberle and Yakupov) was 50 seconds into his shift at this point, but he caught Kadri and made it to Van Riemsdyk's heels. He's got 35 feet on Yakupov, despite starting 11 feet behind him, and has 20 feet on Eberle. He's also gassed, thought not as much as Yakupov and Eberle, as evidenced by their strides in the replay. 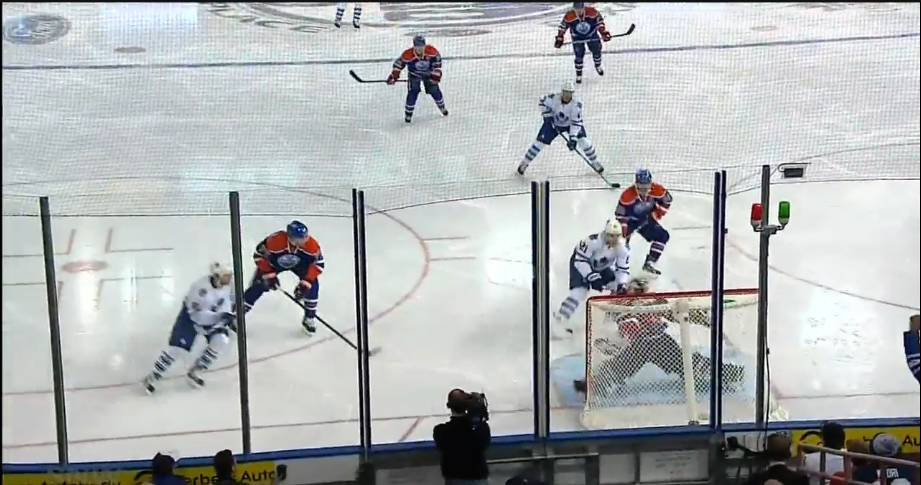 And scene. Gagner may have been able to make a play with his stick or a dive, but he was at the end of his shift, having just skated farther and faster than anyone else on the ice and didn't seem to have much left. He put in a fantastic effort to beat his teammates back to the play by 30 feet after starting behind them and recognizing the risk at the other end faster than them. Gagner didn't have a good night against the Leafs, but in no way, shape, or form was he lazy or floating on the Van Riemsdyk goal.