The Best Players Ever - Round of 24 - First Heat

Share All sharing options for: The Best Players Ever - Round of 24 - First Heat

With two more players--Nels Stewart and Joe Malone--being eliminated to end the first round, the decisions are going to get tougher. The list of players has been refined down to 24, but that still leaves more players to be eliminated than kept before we arrive at a top ten. In this round, we'll be looking at groups of six, but instead of voting to eliminate two players as we did in the last round, only the player with the highest number of votes will be eliminated. The voting will be open until Sunday afternoon with the second heat ready to roll on Monday.

I based the heats for this round on what percentage of the vote each player got in the first round, but because of some wonky voting with Gretzky, the first heat is an absolute killer: Bobby Clarke, Phil Esposito, Wayne Gretzky, Gordie Howe, Howie Morenz, and Cyclone Taylor. Individual profiles for each player can be found in the links below:

In the chart below, I've broken the history of the NHL into ten overlapping thirteen-season segments, and have awarded marks to players based on where they finished in a particular season with regard to goals and points. A player received five marks for leading the league in goals, four marks for finishing second, three marks for third, two for fourth, and one for fifth. I did the same with points and added the totals. The results are below with players still in the field of 24 in blue, and those eliminated in the round of 32 in red: 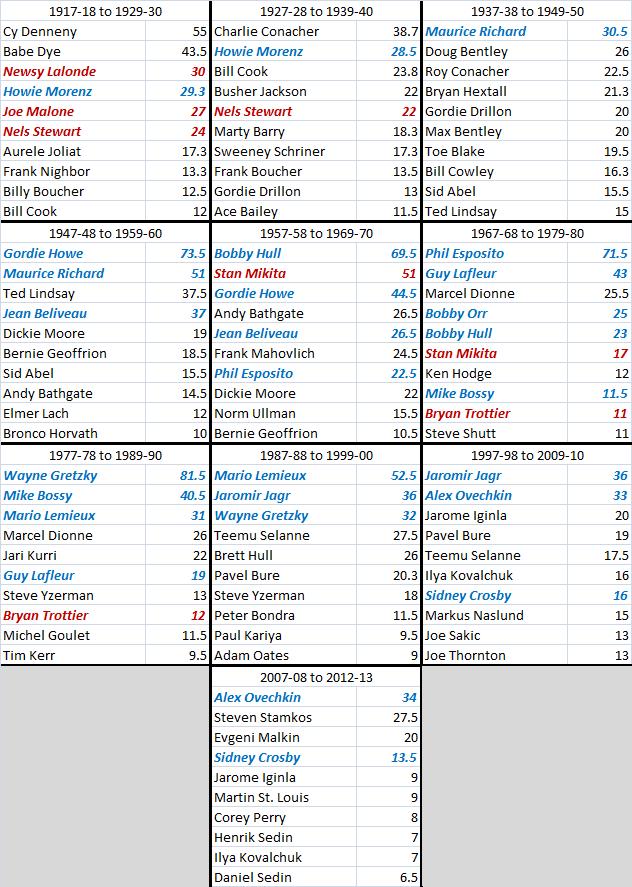 It's a fun way to see how long a player was able to really dominate his era. Now, you can't just add these up because, as I mentioned, they're overlapping. Since I know folks will want to look at the highest totals across eras, here are the fifteen best totals including all seasons: 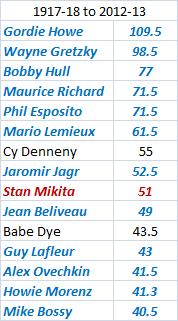 Collecting this data taught me that I've been vastly underrating Alex Ovechkin.

It also shows four players from today's heat, including Howie Morenz. The two players it doesn't show are Cyclone Taylor and Bobby Clarke. Taylor has the excuse of never having played in the NHL. He was probably the most dominant player of his era, but played mostly in the Pacific Coast Hockey Association.

Clarke has the excuse of... not being at the same level offensively as these other players. I understand that Clarke was a fantastic two-way player at even strength and excellent penalty killer, but, in my view, less than elite offense is reason enough for elimination at this stage of the discussion. Being that generation's Pavel Datsyuk just isn't good enough. But that's just my opinion. Voice yours by voting and in the comments below!