Edmonton Oilers vs. Toronto Maple Leafs: The Battle Of The Outshot

Someone needs to win the shots battle

Share All sharing options for: Edmonton Oilers vs. Toronto Maple Leafs: The Battle Of The Outshot

Richard Bachman stood on his heart, his heart and his hands, and though he shut down the Kings through 65 minutes, it wasn't enough - the Oilers lost in a shootout, despite Bachman stopping 47 of 48 shots. The Leafs are getting great goaltending, but have completely fallen apart at even strength - their .417 Fenwick Close is 29th (thanks Buffalo!) but if not for the Sabres would be the second-worst ratio in the league since the stat has been tracked.

Even strength shots aren't the Leafs' only weakness - they're giving up 64.3 shots per 60 on the penalty kill, 28th in the league, though the Oilers made the Coyotes suffering PK look like the '78 Canadiens. 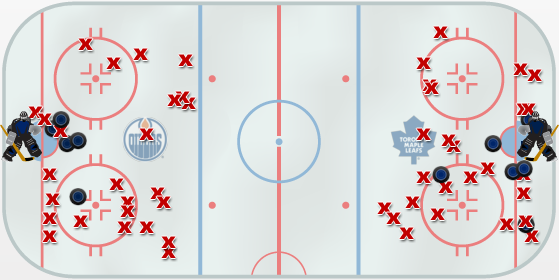 Shots, Shots and more shots: The Maple Leafs give up 34.9 shots per game, the Oilers 31.4. Last time these two played, the Oilers won the shots battle 31-26, including a ridiculous 17-4 advantage in the second period. But Devan Dubnyk was in a slump and the Leafs rallied to win in OT. The Oilers need to outshoot the Leafs again and not let up.

Keep Calm and: David Perron's three shots against the Kings gives him 44 in his last 12 games, meaning his career high is now an arc instead of a point. The last time these two teams played, Perron had his worst game of the season to that point (the Kings game on Sunday was clearly worse), but he was also paired with Boyd Gordon and a struggling Jesse Joensuu. Eakins should make a point of Perron and Ales Hemsky as a duo and sliding Mark Arcobello and Boyd Gordon back and forth depending on the zone and the matchup. Perron and Hemsky are big boys, they can handle difficult matchups and circumstances.

"Apparently the statistics indicate that there were, in fact, players in the faceoff circles not named Anze Kopitar or Boyd Gordon. In his season-high 24:21 of ice time, Kopitar won 20-of-33 draws, while Gordon won 21-of-31 (!) for Edmonton."

--Gordon's performance is made more ridiculous considering he took 26 of those 31 faceoffs in the defensive zone and won 18 (69%) of them. The rest of the Oilers combined for 14 defensive zone faceoffs.

"Nazy played hard. He made some plays through the neutral ice. There was a little flopping around there a few times, diving around, but not many guys can go in and make that play that he made to score the goal."

--Leafs coach Randy Carlyle, probably referring to "possessing the puck" when he says "flopping around there".

Key matchup: Jeff Petry and Ladislav Smid against Nazem Kadri. During the last matchup, Kadri was at his dipsy-doodling, moves-on-the-fly aginst the Oilers' top pairing and it paid off for Toronto. Smid had a very rough game, but seems to have solidified, even if he cannot move the puck under any circumstance.

The Maple Leafs expected lineup based on recent practices and updates:

The Oilers have to run over the Leafs with possession and not let them up. Perhaps a Hurricane Railroad will help: