The Oilers have their own cannon with a smoky visor.

In yesterday's pre-game report, I noted the uptick in David Perron's shots on goal rate:

This season, David Perron is averaging 3.5 shots per game and has found a role as the blaster to Ales Hemsky's setups. If they stay together and they stay healthy, he has a solid chance at breaking 250. His 2.6% shooting percentage isn't going to last, and if he posts 12%, slightly below his career average, he's got a legitimate shot at 30 goals. Keep calm and Perr on?

Perron put 6 more shots on goal against the Coyotes, his third consecutive six-shot performance. In his twelve games as a member of the Oilers, Perron has 44 shots on goal. I compared that 12-game stretch against every other 12 games in his career in the graph below: 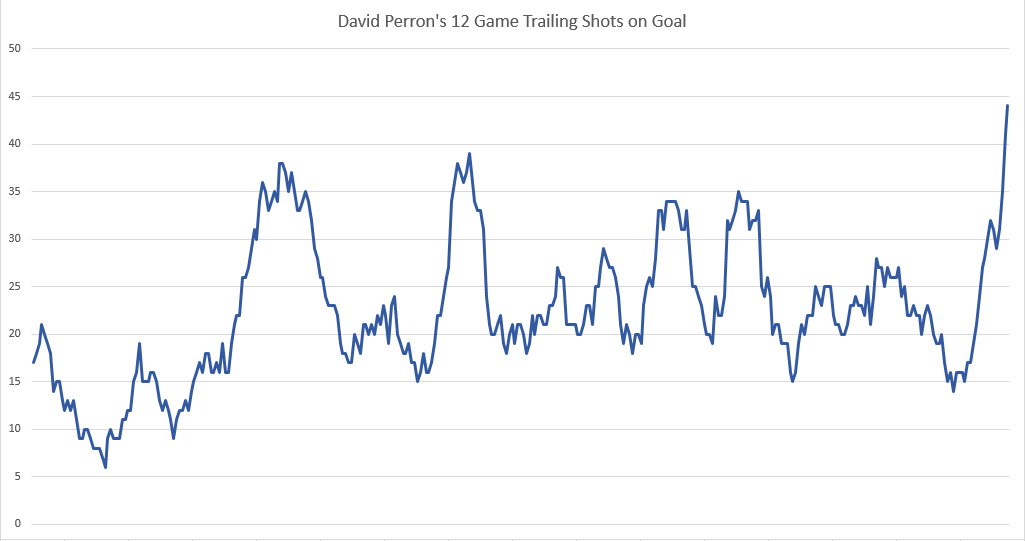 The 44 shots thus far represent a career high in any previous twelve games in the NHL, with the previous high at 39 in 2009-10. Perron is reaping the benefits of playing with Ales Hemsky, as the two have been on the plus side of 54% of Corsi events on the ice together, whereas Perron has a 44% Corsi rating away from Hemsky.