Who Bears The Brunt Of Taylor Hall's Injury?

Hall is on the shelf, the rest of the team will face tougher competition.

Share All sharing options for: Who Bears The Brunt Of Taylor Hall's Injury?

Assuming for now though that Hall is back in the lineup in four weeks, he will miss a total of 13 games, including 8 on the road. Outside of a trade there is no way for the Oilers to replace Hall in the lineup, and so if they hope to be within shouting distance of a playoff spot when Hall returns they are going to have to be a hell of a lot better over the next four weeks than they have been over the seasons first three.

If the Oilers are going to keep it together while they wait on Gagner and Hall to return, they'll have to deal with Hall's time on ice.

Below is a chart showing the Oilers' forwards deployment and results through ten games. The x-axis shows TOI qualcomp, used because of better accuracy in smaller sample sizes. The y-axis shows offensive zonestart %. The bubbles show Corsi/60, with blue representing positive and white negative. The size of the bubble represents absolute value of Corsi/60, the larger the bubble, the larger the negative or positive value.* Click the chart for a higher resolution. 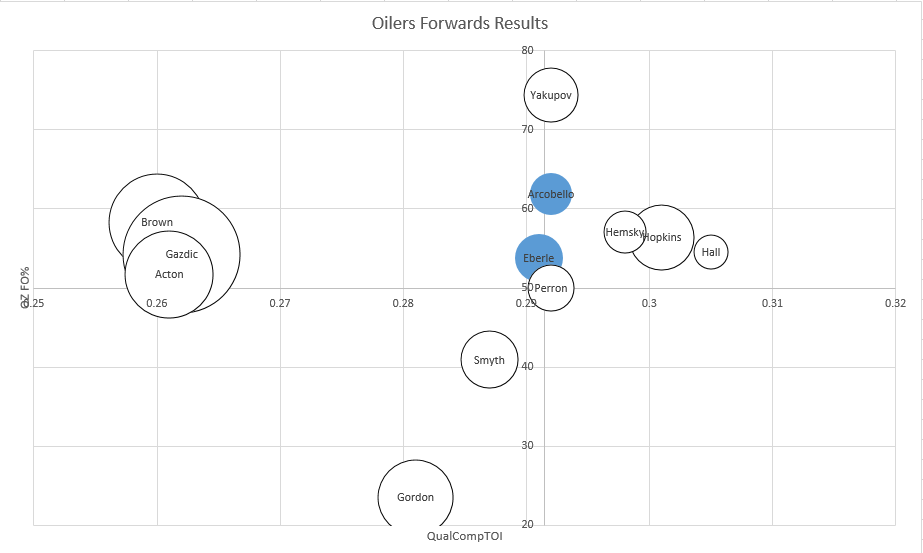 The chart shows the how Dallas Eakins has deployed his motley crew thus far. Actually, it's more representative of the way the opposing coaches have deployed against the Oilers, considering the team has played just three of ten games at home.

The fourth line has had the easiest comp, easy starts and has been a giant black hole. They've been terrible.

The three H's, Ales Hemsky, Ryan Nugent-Hopkins and Taylor Hall have taken the toughest competition buoyed by a nice starting position. The second group is a bit tougher to discern because they're so tightly bunched. Nail Yakupov, Mark Arcobello and David Perron have a hair tougher competition than Jordan Eberle, but they're equal for all intents and purposes. Ryan Smyth and Boyd Gordon are next up, with Gordon taking a ridiculous amount of own-zone faceoffs. The fourth line has had the easiest comp, easy starts and has been a giant black hole. They've been terrible.

In Hall's absence, one of the remaining left wings is going to take on his share of the competition, in this case, the toughest competition available. If Dallas Eakins is going to deploy his forwards like he did against the Canadiens, Perron - Arcobello - Hemsky and Yakupov - Hopkins - Eberle, opposing coaches will have to pick their poison and decide which left wing to attack with their best. Given their linemates, it's probable that both Yakupov and Perron will see tougher competition, dividing Hall's opponents.

However, with Smyth also down for a week, someone on the port side is going to have to step into the void and take the defensive zone faceoffs with Boyd Gordon. 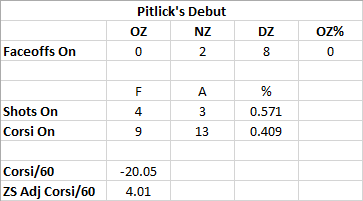 Enter Tyler Pitlick.  Pitlick's callup, despite his offensive struggles in the AHL, wasn't an enormous surprise, especially given how long he survived the axe during Oilers' training camp.  His usage, however, was an enormous surprise.  In his NHL debut, Pitlick was deployed like an old veteran forward. He was on the ice for ten faceoffs, none in the offensive zone, two in the neutral zone and eight in the defensive zone.  While Boyd Gordon played Flash, Pitlick played Hans Zarkov.

Pitlick played nearly 12 minutes, all at even strength, and most of them with Boyd Gordon and looked more like Daniel Winnik than a rookie skater who couldn't find his offense in Oklahoma City.  His zonestart adjusted numbers were quite good, and he certainly wasn't overmatched physically.  He did seem to play too simple of a game - chipping the puck in and chasing it to the corner when he had open ice to carry it - but it was his debut and it's likely that the coaches stressed the importance of managing the puck and risk when on the ice.  If Pitlick can be trusted to survive while soaking up defensive zone faceoffs to give Yakupov and Perron easier starts against tougher competition, the Oilers might survive the Hall outage.

Pitlick's ability to survive defensive situations would be a similarly significant plus for the Oilers when Gagner, then Hall return.  Pitlick played right wing in Oklahoma City and could slide to the right side with Smyth and Gordon on a third line, and eventually to the fourth line with Smyth and Jones in a centre role if/when the top nine is completely healthy.

Then again it was only one game and everything might go south tomorrow.  But consider this: Tyler Pitlick made a more significant positive contribution to the Edmonton Oilers in one game than Mike Brown made in 35 games.