How many top players will reach unrestricted free agency?

Share All sharing options for: Next Summer's Unrestricted Free Agents

Jannik Hansen - Signed on September 29 - Four Years, $2.5M Cap Hit - Even though Hansen received a limited no-trade clause, this is a good contract for the Canucks. Hansen will only be 32 when the contract expires, and he has been able to produce about half a point per game over the last two seasons despite limited opportunities on the power play. Hansen finished third on the Canucks with 24 even strength points in 2013, and fourth on the Canucks with 36 even strength points in 2011-12. Hansen probably could have gotten a better deal as a free agent.

Phil Kessel - Signed on October 1 - Eight Years, $8.0M Cap Hit - This is not a particularly good contract for the Maple Leafs, but it's not awful, and letting your best players walk away isn't usually wise, so I understand why they did the deal. Kessel's deal is front-loaded and ten of the last twelve million dollars that he'll be paid (the last two years of the deal) will come to him via signing bonuses, which protects him against being bought out. With the new CBA, Kessel could also only guarantee that eighth year by re-signing with Toronto. Kessel probably got a better deal from the Maple Leafs than he could've gotten as a free agent.

Jason Pominville - Signed on October 3 - Five Years, $5.6M Cap Hit - This deal pays Pominville for his 32-year-old to 36-year-old seasons. Pominville has been a very good offensive player in the NHL to this point, earning 0.79 points per game in his 23-year-old to 30-year-old seasons. In other words, Pominville is probably worth that kind of money today, but by the second or third year of the deal, this could be a substantial overpayment (similar players like Petr Sykora and Miroslav Satan were out of the league by the time their 36-year-old season rolled around). But that's kind of overpayment we see in free agency all the time. Pominville probably got something close to the best deal that would have been available to him as a free agent.

Dennis Seidenberg - Signed on October 4 - Four Years, $4.0M Cap Hit - Seidenberg is being paid for his 33-year-old to 36-year-old seasons on this contract, so his best years are most likely behind him. Still, he has played at least 22 minutes on the blueline for the last five years, and looks like he's going to be capable of that again this season. He's got decent offensive numbers, and has been playing with one of the league's best teams for the last several seasons, something that seems to have value in free agency. Seidenberg probably could have gotten a better deal as a free agent.

My list of pending free agents (with their age on July 1, 2014 in brackets) is below: 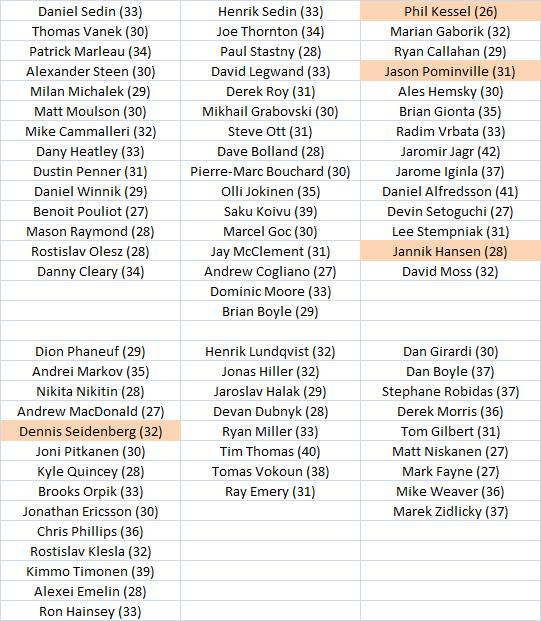