Deterrence Doesn't Work In The NHL

Goons serve no purpose. Here's why.

Share All sharing options for: Deterrence Doesn't Work In The NHL

I began this piece after Craig MacTavish acquired his third goon - Luke Gazdic. Given the controversy and discussion around George Parros ' injury and the calls to ban fighting, it dovetails quite nicely.

There is a contingent of folks who follow hockey who believe that fighting is a necessary part of hockey, and that fighters are the police force within the game, the guys who keep everyone honest. That attitude is best exemplified by the following tweets:

What are your thoughts on fighting in NHL? Gotta think game would be more vicious without deterrent of a beatdown #nhl #fighting #debate

@OilersNation you can ban fighting,but only if high sticks,head shots,hits from behind,and running the goalies are all punishable by death.

Theoretically, without fighting in the NHL, players would run rampant on each other - abusing each other like gladiators in the Coliseum - and the game would turn into a bloodsport. The lid on that boiling pot is firmly held down by the enforcers. Players are afraid of being beaten up, so they walk the straight and narrow. For a recent example, look no further than Zack Kassian in the pre-season. Kassian used his stick like he was Gimli with a battle axe and thumped Sam Gagner in the side of the face with such force that he shattered Gagner's jaw. Kassian felt free to do this because the Oilers did not have an enforcer, a true heavyweight to skate onto the ice and pummel Kassian if he stepped out of line.

Since Kassian's high stick, Oilers' General Manager Craig MacTavish has acquired both Steve MacIntyre and Luke Gazdic via the waiver wire. The folks who hold the views detailed above believe the Oilers are now safe.

I posit that no such deterrent exists and offer the rest of this post as evidence.

You may remember this play, it effectively ended Marc Savard' career

Note the players on the ice, especially Milan Lucic, the vaunted power forward noted for his fighting ability:

Lucic was actually on the ice when this play occurred, yet Cooke still took the run at Savard. And Lucic never went after Cooke. Shawn Thornton, the Bruins brawler was sitting on the bench. He did not pummel Cooke. How was Cooke deterred? How was he made to "answer the bell"?

Oilers' fans remember when Sean Avery turned down a fight with Ladislav Smid (after Smid was upset with Avery's clean hit on Colin Fraser), but then caught Smid with his guard down and delivered a knock-down punch: 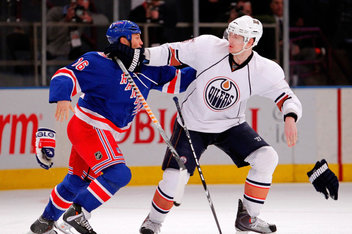 How was Avery made to "answer the bell"? By Brendan Prust fighting Zack Stortini:

In October, 2009, Jarome Iginla, took Sheldon Souray face-first into the boards and Souray suffered a concussion on the play.

The Oilers dressed Zack Stortini, J.F. Jacques (on the first line lord help us) and Ryan Stone that night. None of them deterred Iginla from the dirty hit. None of them attempted to pummel Iginla and make him answer for his sins.

In January of 2012, the Canucks and Bruins faced off in a 2011 Cup Finals rematch. It was a penalty-marred game, including two fights in the first period and a bevy of roughing penalties. Brad Marchand was undeterred, however, in bridging Sami Salo:

Despite the presence of Dale Wiese and Max Lapierre on the bench, and despite the two of them demonstrating their willingness to fight, Marchand bridged Salo anyway. Marchand was not asked to fight directly following the clip.

February 1, 1998: Gary Suter attempts to knock Paul Kariya out of the game forever with this incredibly dirty crosscheck to the face:

Suter does this despite the Ducks dressing noted facepunchers Jeremy Stevenson, who fought 11 times that season and Mark Janssens, who fought 14 times that season. Do any of Suter's actions during that play reflect that he was afraid of being punched by the two guys on the bench? Suter didn't fight that night and Kariya was never the same.

There are dozens of examples like this over the last decade or so. In fact, I encourage you to post your favorite example of deterrence working in the comments. If deterrence was real, these plays wouldn't happen, or at the very least, these players would actually face the deterrent.

But the goons fight only the goons, the cheap shots continue and the beat goes on.

More: An eye-for-an-eye: a true deterrent Are you afraid? Value of an NHL Goon