The Best Players Ever - The Wildcard Vote

Who are the best hockey players to ever play the game?

Share All sharing options for: The Best Players Ever - The Wildcard Vote

In what turned out to be the first installment of a series of posts to determine the ten best players to ever play the game, I began by using major trophy victories to establish some contenders. In the comments, a couple of good points were raised, namely that goalies and defensemen were being undervalued because they have fewer trophies available, and that the Vezina trophies awarded between 1946-47 and 1980-81 were being overvalued. 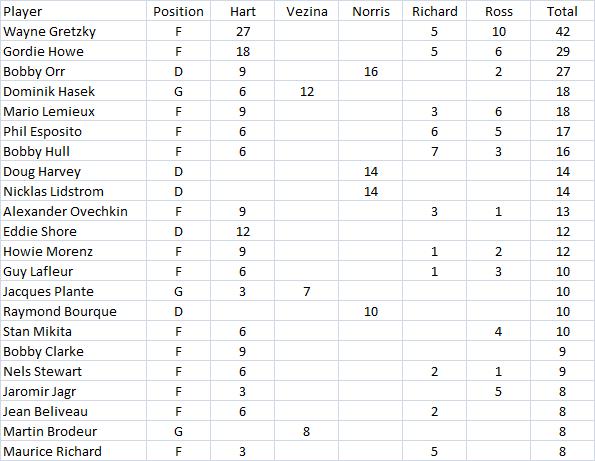 Of course, this list is far from perfect. Some of the best players are missing, and there's plenty to quibble over when it comes to the order. As such, I've decided that we'll add ten more to this list before moving into a tournament-style elimination process. I've picked five wildcard spots myself, all going to players systematically undervalued by the trophy criteria: Cyclone Taylor, Helmuts Balderis, Joe Malone, Newsy Lalonde, and Sergei Makarov.

The other five spots will be determined by today's vote (the voting will stay open until Wednesday). Most of the players eligible in the vote were nominated in the comments of the last post, and I've added a few that I thought were deserving of consideration. There are twenty-five contenders here, and the five who receive the most votes will move on to the main draw. If I was deciding alone, I'd go with Crosby, Fetisov, Messier, Potvin, and Roy. I'll offer one sentence on each guy below to remind you of his accomplishments:

Babe Siebert (D) - Won the Hart before the Norris existed in 1936-37 and was named a First-Team All-Star for three consecutive seasons.

Bryan Trottier (F) - Hart winner in 1978-79 and Conn Smythe winner in 1979-80 won the Stanley Cup six times with the Islanders and Penguins.

Charlie Conacher (F) - The best forward in Leafs' history led the league in points five times and in goals twice, missing an automatic qualification by just one point.

Chris Chelios (D) - Three-time Norris winner played more NHL games and seasons than any defenseman in history, and was named to a year-end All-Star team seven times (five first, two second), with the first one coming in 1988-89 and the last one in 2001-02.

Chris Pronger (D) - The only defenseman since Bobby Orr to win the Hart Trophy won the Norris just once (same year) because he happened to play in the same era as Nicklas Lidstrom.

Denis Potvin (D) - The three-time Norris winner has a 0.99 career points per game rate, third all-time among defensemen; he was named to seven year-end All-Star teams (five first, two second) and won the Stanley Cup four times with the Islanders.

Ken Dryden (G) - Won the Vezina five times and won the Calder as the league's top rookie one year after winning the Conn Smythe as he led the Montreal Canadiens to the Stanley Cup.

King Clancy (D) - Was named a First or Second-Team All-Star four times during the 1920's and 1930's, and won two Stanley Cups with the original Senators before winning a third with the Leafs.

Larry Robinson (D) - Two-time Norris winner was a feared, physical defenseman who also finds himself ninth on the all-time scoring list among defensemen with 958 career points.

Peter Forsberg (F) - 2002-03 Hart winner is eighth all-time in points per game (1.25) despite playing in one of the league's most defensive eras.

Sidney Crosby (F) - The best player in the game today is currently fourth all-time in points per game (1.42), but is first among active players by a country mile.

Steve Yzerman (F) - Centerman was only named to an end of season All-Star team once, but is sixth all-time in points with 1,755.

Terry Sawchuk (G) - Was named a First or Second-Team All-Star seven times (3+4) and is second all-time behind Martin Broduer in shutouts with 102.

Vladislav Tretiak (G) - Was named to the IIHF Centennial All-Star team in 2008, had four of the ten best GAA seasons of the 1980s in the Soviet Union, and is generally regarded as the best Soviet goaltender of all-time.

Vyacheslav Fetisov (D) - Didn't arrive in the NHL until he was 31, but played nine seasons scoring 228 points in 546 regular season games while winning the Stanley Cup twice; in Russia, he led Soviet defensemen in scoring five times; internationally, he was named to the World Championship All-Star team nine times and was named the tournament's best defenseman five times.