Share All sharing options for: Devan Dubnyk's Start - Unexpected, But Not Improbable

Devan Dubnyk's poor start has unleashed a torrent of reactions among fans, ranging from asinine to vitriolic and every highly charged emotion in between.  Calls to sign Ilya Bryzgalov and Mathieu Garon, trade for Brian Elliott, trade for Robin Lehner, and a number of other crazy ideas have come from all corners of the Oilers' fanbase.

However, odds are that a goaltender of Dubnyk's talent level will suffer through a period of .833 goaltending at even strength over 84 shots*.  It's not a likely event, but it's not improbable, either.  Below is a detailing the probability of Dubnyk's performance thus far if we establish his real talent level to be ~.913 at even strength.  The x axis shows save percentage over 84 shots, while the y axis details the probability of Dubnyk's save percentage over that sample. 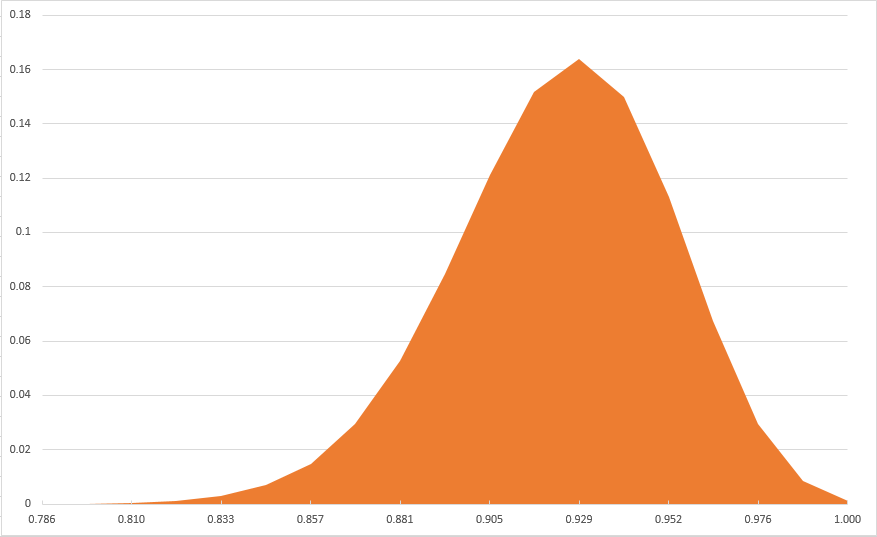 As poorly as he's played, there remains the issue of tipped goals.  Dubnyk's been victimized 3 times by his own teammates, Jason Labarbera has been victimized once in one game.  I'd be surprised if tipped goals were anything but pure luck, so they're bound to happen to all goalies (ask the Capitals goaltenders), but if Dubnyk's 3 tipped goals in 3 games were to happen in January rather than the start of the season, the conversation would be much different.  Edmonton might have two wins and though Dubnyk's .870 save percentage would still be a topic for discussion, the "end of the world as we know it" approach to the discussion might have a different tone.