If the city weren't dead-set on giving Daryl Katz his dream arena, what would they get for their money?

Share All sharing options for: What Else Would $550 Million Buy?

In his article on Monday, Ryan looked at the opinion of Mike Moffatt, an assistant professor at the Richard Ivey School of Business. (Video here) To summarize, "As far as deals go, this may be among the worst in Canadian history."

The cost to taxpayers is hotly debated (see the comments on Ryan's article), but in the end the total cost of the new arena to the taxpayers and province (taxes, bonds, loans and fees combined) is going to come in at around $550 million.

That number got me to thinking - what else could the City of Edmonton buy, not buy and hand over, but buy and own and operate - for $550 million that would keep the Edmonton Oilers in Edmonton, give the city a "world class" facility for hockey and entertainment, revitalize the downtown area, bring additional investment dollars to the downtown area, improve the community, and benefit the denziens that call Edmonton home?

The first part of the puzzle is the easy one. The city could buy the Edmonton Oilers, the team that Daryl Katz threatened to move, and ensure the team never leaves again. They city would need to overcome the NHL's rule against public ownership of franchises, but let's assume this is not a show-stopper. Daryl Katz paid $200 million for the team, if we adjust for inflation that Oilers would cost the city $208 million. The Oilers generate revenue each year, so it's not a money-losing investment and team revenues would help pay for this project over the long haul.

With the franchise locked into Edmonton as long as there is an Edmonton, the "world class" hockey facility issue must be addressed:

Renovations of the current building have been studied multiple times and discussed every year for as long as I can remember. The latest renovation estimates, which would bring to Rexall every conceivable luxury and amenity one could need, are "less than $200 million". Rexall is currently a Northlands property, but the city could negotiate a deal in which they exchange $190 million worth of a makeover for 50% of operating revenues for Rexall Place. Rexall's net income from events was nearly $4.5 million last year, so the city would generate just north of $2 million in revenue per year from owning a 50% stake in events at the facility.

The first two pieces of the puzzle are solved -- the team is here forever and the city has a "world class" facility for hockey and entertainment. But without the anchor project of the new arena to revitalize downtown, the city centre will remain a world class dump. Part of this $550 million investment must revitalize downtown: 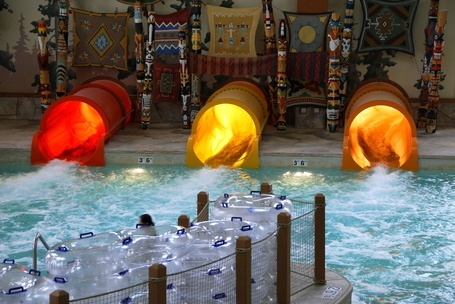 Consider a downtown anchor like Great Wolf Lodge & Water Park. Great Wolf's Traverse City, Michigan location is located on 21 acres and features a 280-room destination hotel, wrapped around a 39,000 square foot indoor water park and 18,000 feet of family entertainment like miniature golf, restaurants, snack bars, kid spas, and a family fitness center. The park is kept at a balmy 84 degrees year-round - a bit of warm respite for plains families suffering from the cold winter blues. It would instantly become Edmonton's greatest family attraction and could be located on the same proprety now set aside for the new arena, making it a keystone for downtown development. The facility features a 99-seat, symposium center as well as a conference center. This one isn't a money-loser either: Great Wolf's 11 locations generated $21 million in net income last year. Their Traverse City location was built for (inflation adjusted) $38.9 million.

Downtown has an anchor attraction, but will still need additional sprucing up to capture the billions of dollars desperately waiting to develop the rest of the area:

The city has a number of facilities dedicated to the fine arts, but music education, and especially development, is under-represented. Adding a 113,000 square foot multi-faceted professional and amateur facility dedicated to the current and future musicians of Edmonton would bring about a renaissance in the Edmonton music scene. The Wanda L. Bass Music Center in Oklahoma City is a fine example to work from. Ongoing revenues from a publicly-dedicated facilities would be small and inconsequential, but the impact of such a Center on the community and the benefits to the citizens is immeasurable.

Those aren't the only anchor facilities in the new plan:

Edmonton is bisected by the natural wonder of the North Saskatchewan River. The city would benefit greatly from economically exploiting the wonder of that resource. An enormous 500 slip marina outfitted for serving water sports enthusiasts as well as sportsmen would be a strong mirror anchor to the family water resort to spearhead the downtown revitalization. Because of the narrowness of the river through the city center, some engineering ingenuity with the existing park areas would be required to create this world-class facility. The facility would be yet another moneymaker. Private boats would be the core of revenue generation, but fishing expeditions and guides as well as powerboat and watercraft rentals would add to the annual revenue stream.

A world-class facility deserves to be shown off, and Edmonton is the ideal host for an event that would do just that:

BASSMaster events have become known throughout the continent, and though they are mostly held on open lakes, the organizers have made exceptions for Pittsburgh's three rivers. The natural beauty of Edmonton and excellent fishing in the North Saskatchewan would be an ideal setting for a yearly event. With that event comes a fishing expo, a perfect event to display the rejuvenated Rexall Place. The yearly costs incurred amount to approximately $2.5 million to the host city, but the economic benefit to the host city is $26 million per yer. That $260 million over ten years will go a long way towards paying the bill for the entire project.

We've added anchors to the downtown revitalization and an world-renown event which will help to kick off all of the private investment waiting in the wings. We still need to improve the community and bring direct benefits to the citizens of Edmonton: 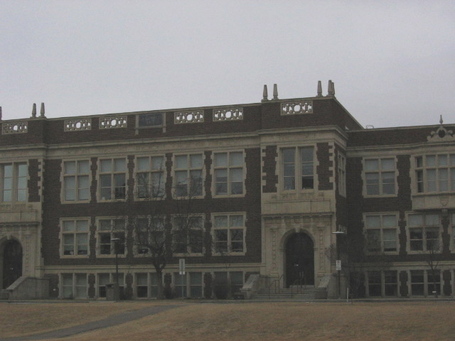 By Wrumsby via via Wikimedia Commons

Education is the foundation of an advanced economy and community. The city could drive growth in both of those areas with a scholarship grant for Edmonton residents based on need and merit. Students at the University of Alberta incur estimated costs of $17,000 a year, and releiving that burden would help to keep gradates in the local area and encourage them to give back to their communities. 1000 years of scholarships would give 250 students, or 25 per year for the next 10 years, the opportunity to became civic leaders for the next 50 years and help to develop the revitalized community even more.

Culinary Center with a full restaurant

The project has contributed to the culture of the city through the world-class Music Center, and a world-class culinary center would bring more focus on the benefits to the locals and the local culture. A center like this could host a vocational culinary school as well a secondary culinary school. Students would learn in the middle of an extremely busy and restaurant-packed revitalized downtown, preparing them for the new entertainment-based economy in the city centre. The center would also host health and diet classes and expos as well as cooking classes, free to city residents. A center like this would benefit both young and old.

Speaking of a changing economy:

The emergence of a hospitality and entertainment industry would require a differently-trained workforce. The new downtown requires everything from restaurant managers to recording engineers and hotel staff to fishing guides and event planners to marina pilots. These are skills that require re-training, and the best way to handle that is a city-built and city-run job training center.

And one final project to top off the vision for the city:

The new revitalization project is about economic revival, but it doesn't ignore the future. With all of these new buildings going up around the city, a rooftop wind farm would show residents that the project is about future benefits and careful design. Find the windiest roof in the city and install 18 wind spires.

There you have it - 10 projects kickstart the city, keep the hockey team and give everyone what they want and generate just short of $450 million in net income for the city over the next 10 years - nearly enough to pay for the entire project in just a decade.

The tick sheet is below with each of the line items and the associated cost. If you're unhappy with an option, swap another one in and build your own Edmonton Reborn plan.

Council and Katz Reach an Agreement on a New Arena