Questions for the 2013 Season: Goaltender Edition

As the Oilers prepare to kick off the 2013 season there are a lot of questions surrounding the team, perhaps nowhere more than between the pipes. Is Dubnyk for real? Can Khabibulin play at a level close to replacement?

Share All sharing options for: Questions for the 2013 Season: Goaltender Edition

The Oilers current rebuild has landed them, as I'm sure you're aware, three consecutive first overall selections. This outcome is due in no small part to the below average goaltending the Oilers have received over the past three seasons. Since Nikolai Khabibulin joined the Oilers prior to the 2009/10 season the Oilers goaltending tandem has posted save percentages of 0.900, 0.903, and 0.912; a number in each case below the league average which has hovered between 0.911 and 0.914 in those same seasons. Goaltending has by no means been the only problem the Oilers have had over the last three seasons but on too many nights it hasn't done them any favours either.

This season, as fans and the media look at a potential playoff push for this young Oilers team, goaltending is often one of the question marks that gets brought up at the start of the conversation. Devan Dubnyk had an excellent second half to the season and was rewarded with a new two-year contract worth $3.5M on average as a result: Will he finally take the step forward that we've all been waiting for and grab the reigns as a true number one goalie in the NHL? And then there's Khabibulin. Coming off another post season surgery and a season that was lacklustre beyond the first dozen games, will he be able to give the Oilers a reliable alternative when Dubnyk needs a night off?

For the first time in his short NHL career Dubnyk will enter this season as the team's number one goalie. Dubnyk had his best season in the NHL in 2011/12 posting a 20-20-3 record along with a 0.914 save percentage and a 2.67 goals against average. Good numbers for sure but, to me at least, they don't scream number one goalie, and that save percentage isn't even a career best. So why then have the Oilers chosen to go head first into this season with Dubnyk as the goalie? The answer can be found in two numbers: 0.902 and 0.920. Those numbers are Dubnyk's save percentage last season before and after New Year's Day.

The Oilers first round pick in the 2004 draft has had a long slow trip to the NHL. There was time in the ECHL before being a backup in the AHL. After two full seasons at the AHL level Dubnyk spent a part of the 2009/10 season in Edmonton before joining the team full time as the backup the season after that. Last year Dubnyk was named the starter on opening night but struggled for the first few months of the season before finally finding his groove, consistently showing why he was first round pick way back when around the time the calendars were flipped to 2012. Combine his good play over the last couple months of the season with the fact that Khabibulin is, well, Khabibulin and the job was all his.

But is depending on a goalie that has played only parts of three seasons and just 101 games total in the NHL a good bet for the Oilers? I no fan of goaltenders but even I've got to admit, it's a bet that has the potential to be very good.

In his career Dubnyk has now faced 3,062 shots. If you break those shots into one thousand shot intervals, roughly 35 game segments, you get save percentages of 0.901, 0.907, and 0.919. Everything seems to be trending in the right direction for Dubnyk. Now, I wouldn't expect a jump over the next 1,000 shots like we saw in the last segment but even if Dubnyk were to level out at around 0.920 he would be providing the Oilers with better goaltending than they've had at any other point of Rebuild 2.0.

Also working in Dubnyk's favour is that he stunk when the Oilers were playing 4-on-5 last season. His 0.821 save percentage with the Oilers a man down was well below the league average of 0.877. A save percentage that far below average is likely due, at least in part, to some bad luck. Give him a couple bounces this season and you're looking at a difference of five or six goals over the course of a 48 game season. All in all I still wouldn't have given the man a two-year contract worth $7M but those are encouraging numbers all the same. Betting on Dubnyk to be able to carry the load looks like a decent gamble to me.

Dubnyk of course isn't the only gamble the Oilers are making between the pipes; they're also hoping Khabibulin can prove to be a useful backup. With the condensed schedule the Oilers will play 48 games in 98 days meaning the backup role is going to be ridiculously important. Is there any chance Khabibulin can cover that bet even for just a few nights? Sadly, no.

The optimists out there will no doubt point to Khabibulin's 0.910 save percentage last season (20 points higher than the year before!) and conclude that he's not terrible. The problem is those numbers are nothing more than a house of cards built on a dozen good games at the start of the year. Take those games away and the whole thing comes tumbling down. To illustrate this I've created the graph below showing Khabibulin's and Dubnyk save percentage over the previous ten games. The first point is games 1-10, the second point 2-11, and so on. 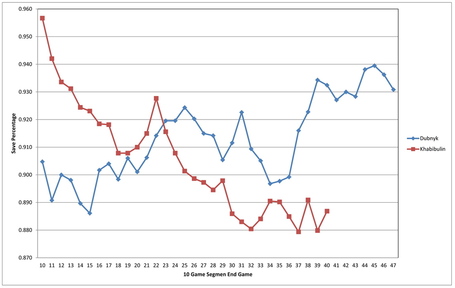 If you can look at that and conclude Khabibulin is even above replacement level goaltending then you must be Steve Tambellini. Continuing to depend on Khabibulin for anything is a very bad bet by Oilers management. It's got a nearly zero percent chance of success and if Dubnyk gets hurt it's a bet that will blow up in their face. Derek is probably right; the entire season rests on one body part.