The 2013 NHL Season Schedule for the Oilers

The schedule for the 2013 NHL season has been released.

Share All sharing options for: The 2013 NHL Season Schedule for the Oilers

I think the title of the article speaks for itself. 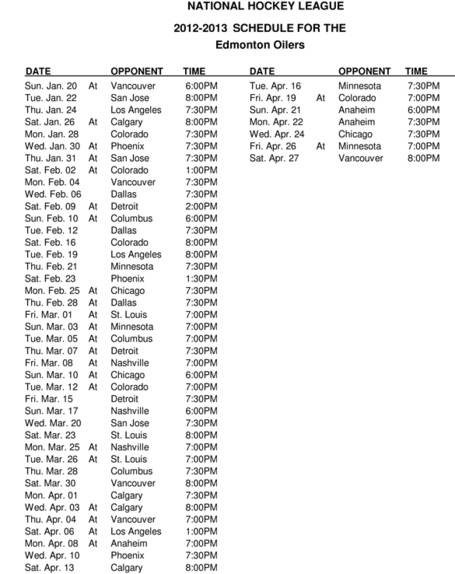 It seems premature to say this, but the Oilers season is going to be decided from February 25th through March 26th. It's a 15 game stretch and 11 of those 15 games are on the road, including 9 straight. The Oilers visit Chicago twice in twice weeks and play St. Louis and Nashville three times, including twice in St. Louis and Nashville. Toss in a home/away against Detroit, and 10 of those 15 games are against 2012 playoff teams and some of the top teams in the league in 2013.

Making things even more difficult for the Oilers is that those 9 road games in a row will be played in just 16 days, limiting recovery time, and making any injuries all the more significant. It will also force Ralph Krueger to play Nikolai Khabibulin on the road at least 3 times.