Share All sharing options for: Weekend Update: Even More Eberle

Continuing their efforts to lock down the best of their young talent, the Oilers have extended Eberle’s contract through 2019. Should there be a season this year of course. This contract as we all know looks nearly identical to Taylor Hall’s, the only difference being that Hall is signed for one additional year. We have to think that that is either because the Oilers were looking to stagger the deals, or because Eberle was looking for more money than Hall, or at least he felt he was worth a little more given his point totals through his short NHL career.

Regardless, these deals are clearly setting the bar for what the Oilers are looking to pay the rest of the team and likely the other first round draft picks when it comes time to sign again. It wouldn’t surprise me to hear that the Oilers have already had conversations about this with the agents for the other players, but then again, no one knows what the next CBA is going to look like, and what hockey is going to look like going forward.

But we do know that going forward in the OHL and the QMJHL the trapezoid has been removed. This could mean that eventually the NHL could have another look, then another since they still haven't come up with a hybrid no touch icing rule.

Former Oiler defenceman and hometown boy Jason Strudwick has picked up the microphone full time it has been announced. The Team 1260 is taking a chance on Strudwick, giving him his own show evenings 9-midnight. If you have already heard Strudwick when he was a guest on the Jason Gregor Show you already know that Strudwick is not a risk behind the mic. He has an infectous laugh and always has a thoughtful take on what is going on with the league and more importantly to you, the Oilers. This show should give radio fans a choice in Oiler post game shows on the AM dial, but Strudwick's presence will likely bring so much more than that.

While it may not serve as hockey news, this is still the hockeyless time of the year, and so you may have read that there was a huge maple syrup theft out of Quebec. And because Pennercakes should be fresh in your minds, you should have immediately thought of Dustin Penner. At least the Los Angeles Kings and their mascot did. 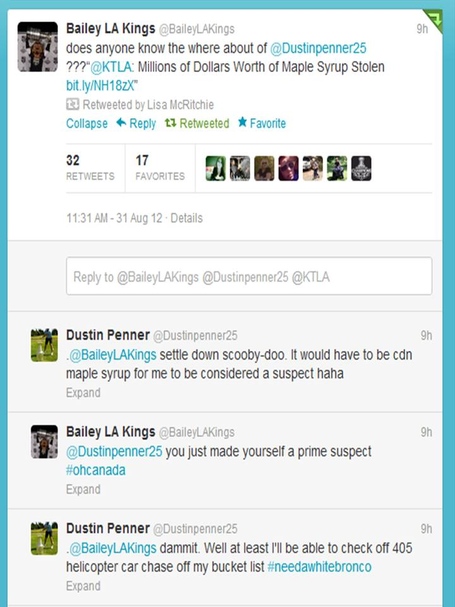 The CBA talks continue, but the latest news seems to indicate that nothing is going to happen any time soon. We can hope that a deal will come together at the last minute and save the season, but I think that at the very least we will miss a month or two.