Share All sharing options for: Clear Victories and One-Goal Games

I've written about Clear Victories several times over the last couple of years, and have suggested that, in general, Clear Victories are a better indicator of talent level than a team's overall record, and much better than a team's record in one-goal games (the Kings, for example, had the seventh-best Clear Victory winning percentage in the NHL during the regular season and fourth-best in the Western Conference, so we knew going into the playoffs that they weren't a typical eighth seed). What proof is there for that view? The proof is that, while there's only a very small positive correlation from season to season in a team's ability to win one-goal games, there's a much larger correlation in a team's ability to win games decided by two or more. I'll illustrate this using the results from the 2005-06 to 2011-12 seasons after the jump. 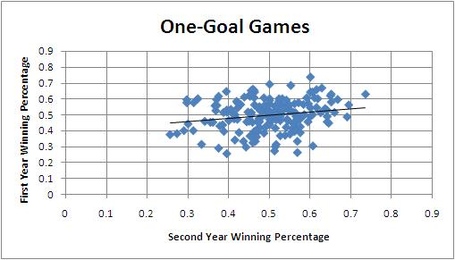 Not so much. We've got 180 pairs here, so we're not just counting on a single season that might be an outlier. The Pearson correlation is just r = 0.19, which is positive (as you'd expect), but not particularly significant. What about games decided by two or more? 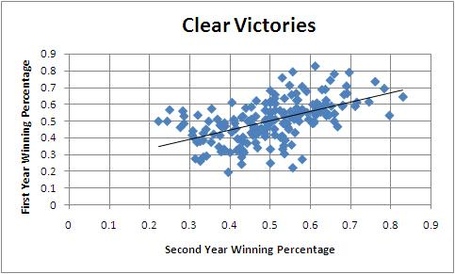 The relationship here still isn't perfect, but it is much stronger. These 180 pairs of seasons produce a Pearson correlation of r = 0.53, which is quite significant. There are clearly some pretty odd pairings mixed in, especially at the margins (teams don't tend to reproduce entirely awesome or entirely repugnant seasons), but for the most part, teams perform at a similar level from one season to the next in games decided by two or more goals. This is true in both the overall data, and in the individual seasons.

Here is a look at the Pearson correlations for both one-goal games and Clear Victories in each of the season pairings:

So what might this mean for teams heading into next season? It means that some teams are probably better than their overall record suggests, while others are probably worse. If you look at the standings posted on the right side-bar, you'll notice that teams like Minnesota (CV Win % of .267) and Tampa Bay (.250) have an enormous amount of ground to make up, whereas a team like Montreal, who finished last in the Eastern Conference, is in a much better position (CV Win% of .457). But it is possible for the teams at the bottom to make it all the way back. As I said earlier, truly repugnant season don't tend to get duplicated. In the nine previous instances of a team finishing below .300, the average next season has seen a CV Win % of .403, and two of those nine saw an improvement all the way to .500 or better. And the Oilers? Well, at least they moved from terrible (.317 in 2010-11) to poor (.419 in 2011-12). Let's hope they can make the jump to average in 2012-13.