How Much Can The Oilers Pay Hall And Eberle?

Share All sharing options for: How Much Can The Oilers Pay Hall And Eberle?

The Oilers have now picked first overall in three consecutive entry drafts, and in each instance the team has drafted a forward. In 2008, they only had the 22nd pick, but Jordan Eberle is, in the minds of many, now a big part of the core group. If everything goes according to plan over the next three or four years, the Oilers should have one of the best groups of top-end forwards in the league. This is obviously a tremendous blessing, but if management hopes to keep this group of players together and still win games, they'll need to be very careful when doling out the dollar bills. The first two players in need of new contracts are Jordan Eberle and Taylor Hall. How much can the Oilers really afford to pay them long term?

This is an especially difficult question to answer now because teams are operating with only rough guidelines for what the next CBA might look like. I spoke a few days ago about the difficulties that presents, but I still think that we can come up with some parameters for what the Oilers should be thinking with four elite forward talents, and right now, no way to be sure which of those four will end up being the best. It seems to me that the Oilers need to be very careful with Hall and Eberle. If they open the vault for those two players, and Yakupov or Nugent-Hopkins ends up being significantly better, that player is likely to ask for much more, at which point it will be difficult to keep everyone together while at the same time leaving enough space to build a strong supporting cast.

So what might "careful" that look like? Let's start by seeing how much each team is spending (in terms of cap hit) on its top four forwards in 2012-13 (entry-level contracts excluded): 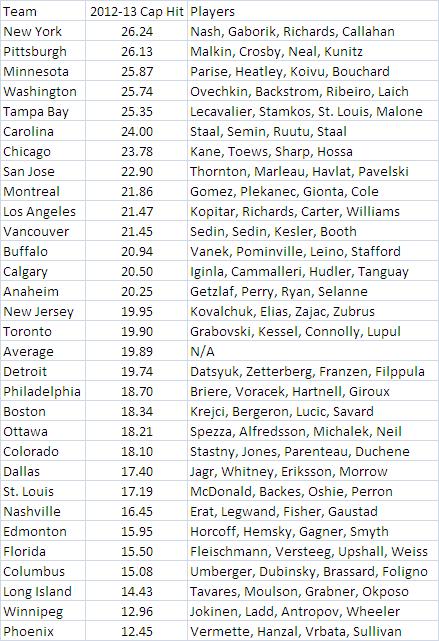 As we all know, getting a lot of bang for your buck is key to building a winner, and with each of these four players putting (at least) four RFA seasons into a long-term contract, I think we should expect the Oilers to get at least decent value at the top of their lineup. Would aiming for average be reasonable? That would mean these four players averaging $5.4M per year. What about the midpoint between the average and the high? That brings us up to $6.25M.

I think that's probably the range I'd be looking for on contracts that carry these players through to about age 28. My own feeling is that Hall is probably going to be a better player than Eberle, but identical contracts might also help to set expectations for the players still to come (much like the Ducks had happen with Bobby Ryan following Getzlaf and Perry or the Penguins had with Malkin following Crosby). At the very least, I'd want to leave some wiggle room after doing the first two contracts in case you find that it's necessary to give the two subsequent players a bump or that salary inflation isn't happening as quickly as you'd expected.

I don't know that I'd want to put an absolutely definitive number on it, but if the Oilers move now and sign the players either to identical seven-year deals at $5.75M per season (or less) or just sign Hall at about that price while waiting on Eberle for a season, I'll be very happy. If the term is only five or six years, I'd expect the money to be less too. If they move now and get term, but the money ends up with the two players between $5.75M and $6.25M, I'll be happy with it, but won't have that same giddy excitement about the future. If they move now and get term, but the money ends up being more than $6.25M, it won't be time to fold up the tents, but I'll be a bit concerned about the team's ability to get to the top of the mountain. It's not like winning a Cup suddenly becomes impossible, but the Oilers probably won't be getting the same kind of obvious value at the top of their lineup, which means they'll need to find it in other spots.