When I was on Nation Radio last weekend, one of the things that Lowetide asked me about was the wisdom of selecting Mitch Moroz with the 32nd overall pick in the 2012 entry draft. Actually, what we asked was, "What are the odds that they would come up with a Milan Lucic just by drafting big guys who can skate and maybe score a little bit?" After responding with the obvious (i.e. "not very good"), I started talking about the progression of Milan Lucic being a pretty unique thing. But is that really true, or are there other players with a similar statistical profile and draft pedigree to Moroz who went on to become good NHL players? That's the question I'll be looking at after the jump.

As always, the first thing to do when looking for comparables is set up some criteria. I decided to start by looking at forwards who played their draft season in the CHL, and were selected between 12th and 52nd overall in their first year of eligibility between 1999 and 2008, a ten-year period that had thirty NHL teams almost the entire time. I then looked for players who were within 0.15 adjusted points per game of Moroz's 0.37 (the points are adjusted to reflect 6.64 non-shootout goals per game, the same number as the 2011-12 WHL). The results include Milan Lucic, Mitch Moroz, and six other players:

There are some really interesting things on this list of players. First off, none of these players were old for their draft year. This is the kind of selection that teams are making based on a player's trajectory rather his overall results, so that isn't exactly surprising, but it is worth noting. Second, these project picks don't generally start happening until the middle of the second round. Setting aside the absolutely horrendous Colton Gillies pick in the first round, these guys are all picked a bit later on (and they were probably considered reach picks there at the time). Still, it pretty much agrees with what the Oilers have said. They were reaching on this pick because they believed that Moroz wouldn't last until the third round. Seems accurate.

But the performance of the group is what's really surprising. Everyone but Brett Clouthier ended up playing at least a few games in the NHL, and while Lucic is clearly the cream of the crop, both Blake Comeau and Shawn Matthias have established themselves as NHL regulars. To be frank, there's a lot less chaff and a lot more hope here than I was expecting.

So how did these players do in the year after they were drafted? The following chart shows their adjusted (again to a league with 6.64 non-shootout goals per game) goals per game and points per game: 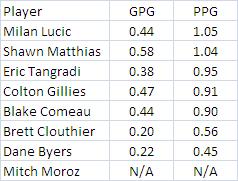 The cream rose to the top quickly. Byers and Clouthier have been the least successful pros, and are also the clear laggards in the group offensively. All of the others are actually pretty similar, although Lucic clearly made the biggest leap, going from near the bottom of the group to the very top. As for Moroz, I think it's safe to say that if he's on a path to the NHL, we're likely to see him score at something close to a point per game level in the upcoming season.