Share All sharing options for: Steve Tambellini Speaks After Day One - Eric Belanger

Over the last couple of days, I've taken a look at some of Steve Tambellini's comments at the end of the first day of free agency. We first looked at what he had to say about the return of Darcy Hordichuk, then took a gander at his comments about the entry draft. Today, we'll hear from Steve Tambellini on the play of Eric Belanger, both in terms of his performance during the 2011-12 season, and what he expects from Belanger going forward.

Here's what Tambellini had to say:

[Ralph] fells that he and Belli can find a way to get him back to where he's been for most of his career. That was the most difficult year he's had as far as production. And things change. You know, last year going into the season, the depth chart really didn't look like it was going to have that guy RNH sitting there at the top. And people ask, "Well you knew he going to play?" No, we didn't know he was going to play last year, but he was special and he came in, and he knocked all those centermen down a notch, and all of a sudden, instead of playing third line on a lot of the nights, Eric was playing on the fourth line, which changes your mindset and your ability for offensive production. But Ralph really believes that he can work with Eric and get him back to where he should be. He feels very positive about that.

This comment is all kinds of bizarre. Starting with the good, I'm happy to hear that the team brought in Belanger so that they'd have a reasonable option at center even if they had decided to send Ryan Nugent-Hopkins back to junior. That's the kind of foresight that the club has lacked over the last few years, and no matter what you think of Belanger, I think we can agree more of that kind of thought process is a good thing.

After that, things get a bit rough. It's impossible to square these comments with what actually happened a year ago. Setting aside the discussion about whether or not Nugent-Hopkins was the team's top-line center from the outset (interesting to note that this is how Tambellini frames it; he's probably just trying to piss Derek off), Belanger didn't suffer from Nugent-Hopkins playing a major role on the team when the season began. Tambellini says himself that the expectation was for Belanger to be on the third line and Nugent-Hopkins making the team didn't impact that at all.

In the chart below, we can see that Belanger was given a lot of opportunity early in the year. I've listed his total time on ice, his power play time, and his two most common forward linemates in each game. I've highlighted in blue all of the times that you'd associate that kind of ice time with a fourth line player (less than 12:00 per game total, less than 0:30 of PP time or fourth line players as linemates): 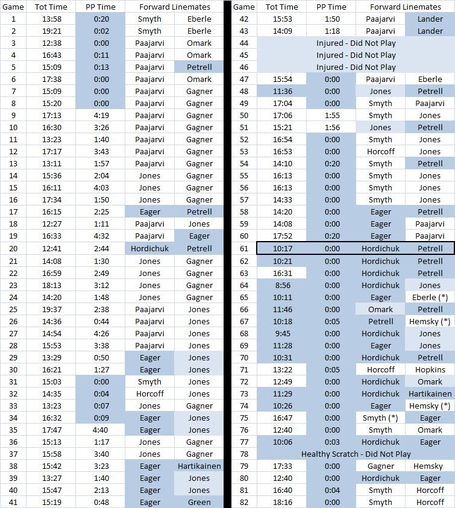 As you can see, Belanger received a lot of opportunity during the first half of the season. He played with talented players and received plenty of ice time. When the offense didn't come right away, he was given a role on the power play to try to turn things around. The problem wasn't that Nugent-Hopkins stole Belanger's spot "all of a sudden"; the problem was that he failed to deliver in the opportunities he was given. It wasn't until the third quarter that Belanger lost his PP time, and not until the last quarter that he was playing a fourth line role.

Earlier this off-season, I wrote about Eric Belanger's difficult season and whether or not he was likely to recover going forward. The historical comparables didn't look too promising, but more than that, Belanger's performance was poor enough to make me think that he wouldn't be given as much opportunity in 2012-13 as he had been in 2011-12. There would be no power play time and no quality linemates to start; instead, it would be the fourth line and PK duty while he tried to work his way back up.

Interestingly, Game 61, which is where Belanger gets shunted down the lineup, was Tom Renney's first game back behind the bench after his concussion. That combined with these comments makes me think that I may have been wrong about the opportunities Belanger is likely to receive. If Krueger is serious about Belanger getting back to his previous level, that likely means playing him in the top nine to start the year.