It's no secret that Jordan Eberle's shooting percentage was pretty high this past season. Among players with at least 100 shots, his 18.9% was fourth-best in the NHL for 2011-12, and if we use that same criteria to look at the past seven seasons, it's good enough for 30th overall. The conventional wisdom is that Eberle isn't going to be able to sustain that percentage next season, and a quick look at how the players above him on that second list performed in the season after their high shooting percentage shows why that's the case (I've only included the players who had a minimum of 100 shots in both seasons): 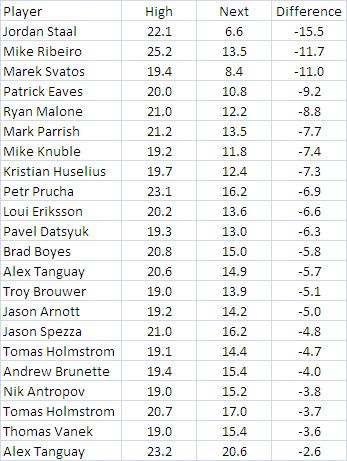 Some fans clearly think that the answer is "yes". In the comments section of a recent article on this site, commenter Wolfmand suggested that our expectations should be for Eberle to outperform his peers:

While it would be unreasonable to expect him to shoot 19%. I would be surprised if Eberle’s shooting percentage drops below 16%.

So is 16% over the long haul a reasonable expectation? I don't think so. There were just four guys who took at least 500 total regular season shots from 2005-06 to 2011-12 and scored on at least 16% of them. There were 297 forwards who qualified, so 16% is probably a tad on the optimistic side, even if you think Eberle is a really good shooter.

Of course, I do think that Eberle is a really good shooter. He shot 11.4% in his rookie NHL season, which would be good enough for to tie for 149th on that list of 297 forwards, or about average for an established NHL forward. In a very small AHL sample, he shot 20% (with nine goals on forty-four shots). We don’t have the shots information for the WHL, but we do for the QMJHL where, from 2006-07 to 2009-10 there were just thirty player seasons that saw a player hit at least four shots per game during the regular season with only two players doing so in at least two different seasons. Even if we estimate that Eberle averaged four shots per game over his entire junior career (and if that’s true, it’s a major plus for where his shot rate might be heading) that still leaves him shooting just over 15% in the WHL on just over 1,000 shots, a number that's well above average and helps to explain Eberle's presence near the top of the goal-scoring charts.

So what would be a reasonable line in the sand for Eberle heading into next season? Before we establish that, I think it's important to remember that save percentages are still getting better. It's also important to remember that one season is a pretty short period of time and that we see large swings in shooting percentage when looking at just one year. As such, I think we might be better off to set a line in the sand for a longer period than just next season if we're looking to make a prediction.

Based on the data available to me, and the fact that Eberle is projected to play on the top power play unit in Edmonton going forward, I'd feel comfortable suggesting that Eberle should end up with a shooting percentage in the top quarter of the league's established forwards over the next seven seasons (min. 500 shots). If we assume that goaltenders remain at the same level over the next five years as they established over the past seven, that would put Eberle at 12.7% or better.