Share All sharing options for: Thinking Ahead...Organizational Need at Forward 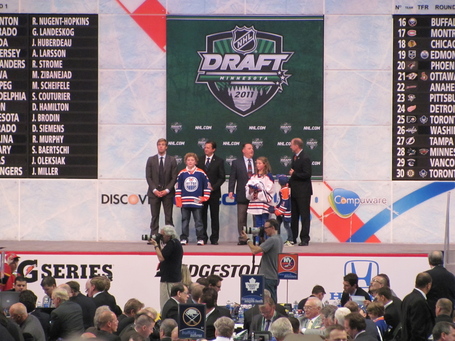 As he has done on multiple occassions in the past, the incomparable Jonathan Willis beat me to the punch when he wrote about this very topic here. That being said, there is plenty of internet to go around...

On the 1st of June, Steve Tambellini did something I've almost never heard before during his time as GM of the Oilers. He made a compelling argument in favour of making what I consider to be a smart decision. Now, once you pick you jaw up off the floor and re-read that sentence six or seven times to make sure your eyes aren't playing tricks on you, I'll explain...

Tambellini was interviewed by Greg Brady from the Fan 590 in Toronto. As a former Torontonian, I'm actually somewhat a fan of Brady's work as he routinely takes an interest in teams outside of his city and takes the time to be educated about the circumstances affecting the other teams around the NHL.

On this occassion, as I'm sure has been done over a hundred times since the draft lottery, Brady and his co-host Jim Lang were speaking to Tambellini about his plans for the #1 pick at Friday's NHL Draft. The entire interview can be heard here, but specifically in regard to addressing the team's "organizational needs on defence", here is what Tambellini had to say:

Lang: "It's no secret Steve that getting defence and getting depth on your blueline must be your number one priority in the off-season?"

Tambellini: "Well, now, it depends what you are talking about too, because sometimes people get confused on what the Oilers need now, as far as their roster or what we need to select in the draft. As far as our roster, yes, we do know that with the Oilers roster now, that we need to improve our defence, but when you are drafting, it doesn't necessarily mean that the player is going to be on that roster the next season. But, uh, you know, there is some interesting defence and different forwards in this draft as usual, but there is a lot of depth here."

Lowetide shared my shock at the quality of Tambellini's responses.

Without going into too much detail on how impressed I was (it's a low bar to clear at this point) with the calibre of Tambellini's response, he raises the valid point that while the team's defence needs improvement, that does not necessarily validate drafting defencemen in this Friday's draft.

This point highlights a notion that has been rattling around in my head since around Christmas time, when we all resigned ourselves to the fact that the Oilers were likely looking at another lottery pick...that what the Oilers really need to do this year, is focus on drafting forwards.

It flies in the face of what every analyst will tell you since they tend to focus on the immediate future of the team at the NHL level, but really, the prospect pool for the Oilers at centre and on the wings is getting quite frighteningly empty. How could this be the case? Well, the team has known for years that they have had a glaring weakness on the blueline and as a result...they've drafted a truck load of defencemen.

Over the last two seasons, the team has drafted 7 bluelners (Martin Marincin, Jeremie Blain, Brandon Davidson, Oscar Klefbom, David Musil, Dillon Simpson and Martin Gernat) as well as acquiring Colten Teubert via trade from the LA Kings and signing college free agent Taylor Fedun. That is 9 new blueliners added to the prospect pool in a very short time period. When you consider that teams only carry 7 Dmen at the NHL level, that is quite the backlog. When you add in longer term prospects like Alex Plante and Kyle Bigos who are still developping as well, you've got more than 11 players in the finite space of a team's prospect pool dedicated to one position. Add in the fact that the team has also drafted 3 goalies in the last two years (Tyler Bunz, Samu Perhonen, Frans Tuohimaa) and that is a full 10 picks spent on players other than forwards in the last two drafts.

It's important to point out that I don't disagree with any of these decisions so far. There may be particular players I would have passed on in favour of others, but the strategy to build the organizational depth on the blueline was a necessary one.

However, much like the "re-build", the time for this phase of the plan is over. For while the team was stocking the cupboard on the back end, the front end was being emptied at a pace that is almost impossible to keep up with. During the last two seasons, the team has graduated, in full or at least in part, all of the following players...Taylor Hall, Jordan Eberle, Ryan Nugent-Hopkins, Magnus Paajarvi, Linus Omark, Teemu Hartikainen and Anton Lander.

With the Oilers having already graduated their first selection from each of the last 5 drafts as well as another player who was still a teenager in Anton Lander along with a couple of additional longer term prospects in Omark and Hartikainen, it leaves a gaping hole in the development of additional forward prospects. When you consider that approximately 57% of an NHL roster is made up of forwards, a continual pipeline of new blood at centre and on the wings is a necessity for any prolonged success.

Looking back over the last five NHL Drafts for the Oilers and removing the players listed above as most have already played significant games in the NHL, here are the remaining players the team has drafted since 2007:

2010: Tyler Pitlick (had a strong 2nd half in OKC), Curtis Hamilton (had an awful first pro season with the Barons, but has promise as a bottom six forward), Ryan Martindale (ECHL), Drew Czerwonka (re-entering draft, was not signed by the team), Kristians Pelss (recently signed to an ELC) and Kellen Jones (Still in school until 2014)

2011: Travis Ewanyk (missed almost entire 1st post-draft season to injury), Tobias Reider (4th round pick who showed tremendous progress in the second half this season for the Kitchener Rangers)

(With the exception of Chris VandeVelde, whose pro career was delayed by finishing 4 years of College, no forward prospect is left in the system that was drafted pre-2008.)

Looking at this list, can the Oilers really state that there is a single player on this list that is a definitive lock to make the NHL as a regular top 12 player? The most likely candidate would be Pitlick, and I would argue there is hope for Hamilton, Ewanyk and Reider, but realistically, maybe 2 of that group making it is optimistic. The team has additional prospects like Marc Arcobello, Hunter Tremblay, Tanner House, etc., but most of those guys are likely career AHL players and call-up options at best. If they are asked to be anything more, then that is a sad commentary on the state of the Oilers' depth chart. Realistically, they have a whole bunch of maybe, and not a lot more.

Obviously with the amount of young talent at the NHL level, this is not an immediate problem, however, the team should begin taking measures to address it now for a couple of reasons.

First of all, the young stars are going to become significantly more expensive over the next 2-3 seasons. While right now the team can have Ales Hemsky and Shawn Horcoff making $5 Million+ per year because the kids are on their entry-level deals, by the time RNH completes his first contract, the tables will have turned and the team will be forced to spend upwards of 40% of their salary cap space on their high-end forwards. This will make the need for young, inexpensive players to plug holes in the line-up an essential part of staying competitive over the long term.

Further to that point, once the team starts the long climb up the standings, their draft position will begin to suffer, which means it will become far less likely they will be able to draft players who will arrive in the NHL before their 20th birthday. Basically, the players they are drafting this year will be some of the players who start filling the gaps left when the team's current veteran contracts start to run out.

The final point here is one that Ryan Batty touched on nicely in his article this morning, that being that the time may come where the team needs to trade one of their young impact forwards for immediate help on the blueline, which would again open more holes up front. As it stands now, the team is unprepared to fill any gaps created by trading a Sam Gagner or Jordan Eberle for a star defenceman should that opportunity present itself. This is something they need to start the process of changing in the near future.

They have time right now to address this calmly and proactively, but by next year, this will be a real problem if Tambellini, MacT and Kevin Lowe aren't paying attention.

To be clear before I open myself up to some mis-interpretation, this has nothing to do with this year's top pick...not a thing. #1 overall picks are a special gift unto themselves, and in that case, I happen to be in favour of taking Yakupov, solely because I believe he is the best player available and the one most likely to become a star in the NHL...you can never have enough of those assets. What I am specifically referring to is in the mid-to-late rounds. On the second day of the draft, it is still important to take the best player available, but all things being equal, the team's focus should be on finding the next Lander or Hartikainen rather than the next Theo Peckham or Brandon Davidson.

I didn't think I'd ever be able to say this but, Steve...Tambellini...is...Right. (it feels dirty just writing that). The team's NHL needs are most assuredly along the blueline, specifically adding two players to the top four, but looking closer, the team's focus entering the draft should be around replenishing their crop of forward prospects.