Share All sharing options for: Sam Gagner and Salary Arbitration

The NHL draft is an exciting time because every organization has a chance to add to their future by selecting young men who are trying to live out their dream of playing professional hockey in the best league in the world. But it's also exciting because it's one of the few times in the year that we often see significant player movement as clubs try to position themselves for the next season and for the seasons to come. For the Oilers, one significant question is what to do with Sam Gagner. Should he be leveraged in a trade or is he an essential part of the future? With unrestricted free agency just two years away, should he be signed to a long-term contract, or should the Oilers stand firm on a short-term deal to see what kind of offense he produces in the next year or two? One of the many things to take into consideration is the fact that Gagner is eligible for salary arbitration because a big award there could really throw the Oilers' salary structure for a loop. Should that be a major concern?

I don't think it is. Sam Gagner's path to the NHL is somewhat unique in that he started his career at 17 but hasn't become a superstar. That makes it difficult to find players who are about the same age with about the same level of experience and similar results. That being the case, in my search for comparable players I decided to disregard experience and just look for players who are about the same age as Gagner this season (23 or younger) and had a similar performance to Gagner in their platform season (between 0.55 and 0.65 points per game and between 0.2 and 0.3 goals per game in at least 60 games). The results don't suggest a booming arbitration case for the young centerman: 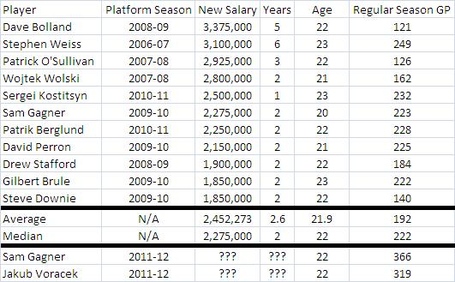 The median contract is in fact Gagner's last contract, which is a bit amusing, and serves to highlight the ways in which Gagner's performance by the traditional offensive measures has stagnated. It's also fun that he and Jakub Voracek continue to track well with one another as they have ever since they were drafted. But the best thing here for the Oilers is the absence of any truly scary numbers. Granted, Gagner has way more games played than most of these players, but even if he ends up at the high end of this chart (based on established performance), he wouldn't end up grossly overpaid and would likely remain a desirable commodity via trade.

Now, I don't know what kind of player the Oilers could get in return for Gagner, so I won't say that they should definitely keep him or definitely trade him. I will say that it's helpful to be in a position where a decision doesn't need to happen now and where, if the Oilers decide they'd like to bring the player back, they can negotiate knowing that arbitration probably isn't something to be overly worried about.