The Edmonton Oilers have signed defender Oscar Klefbom to an entry-level contract that will begin either next season or in 2013-14 if Klefbom spends next season in Europe. With the current CBA expiring in September, it's interesting to see both parties comfortable enough with the current system to do a deal now. I think that there was much more risk in a new CBA for Klefbom than there was for the Oilers since I think that it's quite possible we see young players get thrown under the bus a bit in negotiations (we could easily see five-year instead of three-year entry-level contracts, for example, if the owners give something else back to the players). Still, by putting pen to paper now, the Oilers avoid a tense situation before next season's draft (when Klefbom could re-enter if he is left unsigned), and Klefbom guarantees himself about $500,000 in earnings (minor league salary plus signing bonuses) regardless of his performance or health. The cap hit on the deal looks to be $1.275M. After the jump, I'll compare that number to some of Klefbom's draft peers. 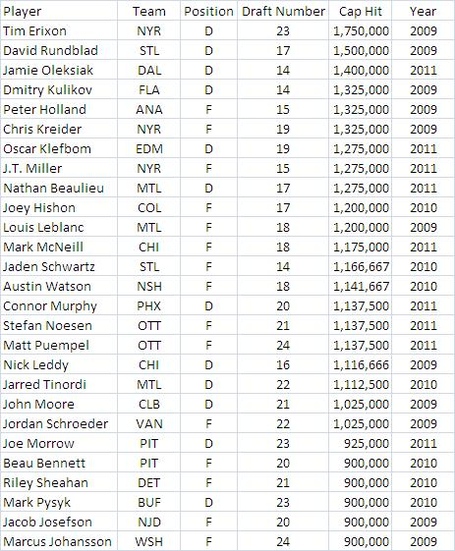 A couple of things before we talk about Klefbom:

Back to Klefbom, you can see that there's a pretty tight range here with almost all of the players involved getting the maximum base salary. The difference in cap hit is almost always just a difference in performance bonuses available. Klefbom ends up near the top of this list, grouped in with the players chosen ahead of him rather than with the players chosen after him.
I think that's mostly a good thing because it indicates that Klefbom is a very good prospect. The obvious concern is his lack of offense with just four points in his fifty-six career SEL games. That concern is mitigated somewhat by his lack of ice time in those games, but it's not like a lack of ice time is something to celebrate. Still, the scouting reports have generally been positive, and Klefbom has, in fact, looked good in the few times I've been able to watch him play (at the World Juniors). Hopefully he gets some more ice time next season and the offense follows.