What We Can Expect From Devan Dubnyk

Share All sharing options for: What We Can Expect From Devan Dubnyk

Before the season began, I looked at how goaltenders with a similar track record to Devan Dubnyk in their 22-24 year-old seasons performed at age 25. On average, those goaltenders played in 37 games, faced 978 shots, and posted a save percentage of .906, which seemed like a reasonable line in the sand for Dubnyk heading into the 2011-12 season. Devan Dubnyk bested all of those numbers, playing in 47 games, facing 1,380 shots, and registering a save percentage of .914. It was a very successful season for the young netminder, and with a new contract on the horizon, it both the Oilers and Dubnyk's agent need to take a close look at what they should expect from Dubnyk going forward. After the jump, that's exactly what we'll do.

Even though Devan Dubnyk blew last year's line in the sand away, I remain convinced that one of the best ways to better understand what to expect is by looking at what players with a similar profile have done in the past. As such, I went looking for goaltenders with a similar NHL performance to Dubnyk's in their 22 to 25 year-old seasons, and then looked at their performance at age 26. All of the comparables listed below started their NHL careers in 1997 or later, and played between 60 and 140 games in their 22 through 25 year-old season. With the exception of Andrew Raycroft and Michal Neuvirth, none of them played more than five games in a season prior to their 22 year-old season. They also all had a save percentage between .905 and .915 (to put them within shouting distance of Dubnyk's .910). Here are the results: 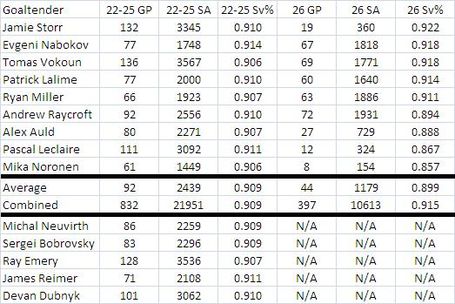 It's an interesting group. The first group contains a few very good goaltenders in Evgeni Nabokov, Tomas Vokoun, and Ryan Miller as well as several who ended up being busts like Mika Noronen, Pascal Leclaire, and Andrew Raycroft. It's a good reminder that, even though we've seen Dubnyk for a few seasons now, there's still a very wide range of possible outcomes. The average save percentage score above is dragged down by a couple of goalies who barely played, so I'd rather go with the combined save percentage as a line in the sand for next season. That means a successful season in 2012-13 would see Dubnyk get the lion's share of the starts and post a save percentage of .915 or better. Seems fair to me.

That second group of goaltenders is also interesting. Ray Emery didn't have a twenty-six year-old season on the chart because he was busy playing (very well) in the KHL. Neuvirth, Sergei Bobrovsky, and James Reimer are Dubnyk's peers, but they're also all a couple of years younger than Dubnyk. By the time two more seasons go by, it's quite possible that none of them will meet the criteria I've laid out above.

Of particular interest, given Dubnyk's free agent status, is Pascal Leclaire. Leclaire signed a three-year deal as a restricted free agent after his twenty-five year-old season in July of 2008 that paid him an average of $3.8M per season (seasons of $3M, $3.6M, and $4.8M). If I was Dubnyk's agent, that would be a number that I took with me to an arbitration hearing.

In the end, if I'm the Oilers, I'd be willing to give Dubnyk some term if he's willing to keep the price point down. Something like three or four years at $2.5M would be great. But if it gets richer than that, I don't think it would be worth the risk, in which case you may as well go with a one-year deal as cheaply as possible. If I'm Dubnyk, I'd be happy to file for arbitration and push for at least $2M on a one-year deal. I don't know what kind of risk he's willing to take, but if I were in his shoes, I'd also be willing to leave a bit of money on the table to get the added security that comes with longer term. That four-year deal mentioned above, for example, would be difficult for me to turn down.