How Much Should the Oilers Pay Ryan Smyth?

Share All sharing options for: How Much Should the Oilers Pay Ryan Smyth?

When Ryan Smyth returned to the Edmonton Oilers, it was a fantastic day months-long process. Smyth's departure was the beginning of several seasons of horror, and there was some hope early on in the year that his return might also mean a return to respectability. It didn't turn out that way, but I'm not about to put that failure on Smyth, who was a much better player than I had expected.

Smyth was used mostly against the opposition's top guns on one of the top two lines at even strength, and he came out of it almost breaking even. That performance enabled the Oilers to give some shelter to their young stars, and when both of those groups played well, the Oilers even won some games.

But now it's time once again to negotiate a contract, something that has never been easy for the Oilers and Smyth. You'd think that it would be easier now that both parties know that Smyth wants to stay, but alas, with Smyth's status still up in the air, it's pretty clear that the two parties are reasonably far apart on a new deal.

Of course, it's not there hasn't been any discussion. We know that the Oilers offered Smyth a new contract around the trade deadline, and Robin Brownlee suggests that the offer was about $2M per season for two seasons. That number does sound a bit low to me, so like Brownlee, I can understand why Smyth didn't jump out and grab it. But what is reasonable? Let's take a look at after the jump.

In order to get a sense of what Smyth should be making, I looked for other players who had similar seasons to Smyth before signing a new contract. Below, I've listed players from the last five seasons who scored between fifteen and twenty-five goals as well as forty and fifty points at age 33 or older in a contract year along with their new contract: 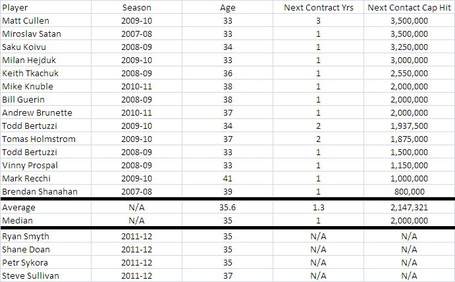 I was a bit surprised by this. I thought we'd see a lot more examples like Matt Cullen, but they just aren't there. All of a sudden that (potential) two-year deal offered by the Oilers looks pretty fair. Granted, the salary cap has been on the rise over the last few seasons, so you might be able to argue that the cash should get a bump, but most of these guys are being forced to settle for one season instead of two.

Now, I'll admit up front that I want to see Smyth signed. Furthermore, it's awful to watch the Oilers overpay a guy like Andy Sutton and then start penny-pinching with Ryan Smyth. But I can't say that Steve Tambellini is low-balling Smyth here. He made a fair offer. Smyth turned it down and is trying to maximize his earnings, and that's his right. It'll be interesting to see what deal ends up getting worked out, especially if it ends up being with with another team.