Share All sharing options for: Can Eric Belanger Recover?

Eric Belanger did not have a very good season with the Edmonton Oilers. Coming into this season, Belanger had played a total of 716 regular season games in the NHL, and his recent history saw him being used consistently among the top nine forwards with several playoff-caliber teams including the 2010-11 Coyotes, the 2009-10 Capitals, and the 2007-08 Wild. When the Oilers signed him to a three-year deal over the summer, it seemed like a pretty good idea to me (though further research suggests that Steve Tambellini and I may have been wrong on this one) even though I knew that age-related decline was a possibility. Unfortunately for the Oilers, it looks like that decline may have happened in his first year with the team.

When we take a look at players with a similar performance, the picture isn't pretty. In Belanger's previous 716 games, he had averaged 0.47 points per game. In 78 games with the Oilers this season, he had just 16 points, or 0.21 points per game. By the end of the season, he was a healthy scratch. Below, I've assembled a list of forwards who began their career no later than 1988-89, played at least 600 career regular season games, and averaged between 0.4 and 0.6 points per game for their career. These players also had a season at age 32 or older that saw them score 0.25 points per game or less. They didn't generally recover well: 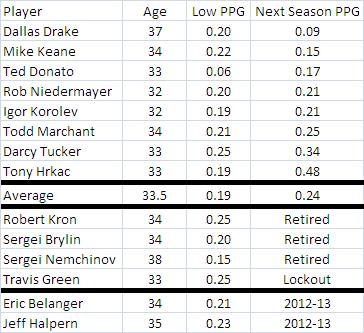 There's not a lot of hope there. Of the twelve comparable players, three retired and one lost his next season to the lockout. Of the eight players who continued playing, just one saw his offense come back. In general, this kind of season is a sign that the end is near.

As for circumstances, Belanger's ice time was cut after a poor start - he averaged 15:58 though the first ten games compared to 14:44 on the year as a whole - and a lot of his even strength time was spent with players like Ryan Jones and Ben Eager, which isn't exactly going to help with the offense. Belanger also had much less time on the power play than he's had in recent years (1:04 per game this season compared to 1:30, 1:58, 2:05, 2:21, and 2:34 in the five previous seasons) and what time he did get was often spent playing the point.

The problem for Belanger is that those circumstances aren't likely to change. In fact, he's probably less likely to get offensive opportunities going forward. When this year began, Belanger had a spot up the middle with Sam Gagner shifted to wing. If Gagner is still around, I don't think we'll see that in 2012-13. Instead, we'll see Belanger taking up a home on the fourth line, which means more playing time with Joneses and Eagers.

On the bright side, Belanger can still be a quality fourth-line center. He's still very good in the faceoff circle, and he can handle a role on the PK. His presence on the roster will hopefully also help the Oilers to make the right decision with Anton Lander (a year in the AHL). $1.75M is a hefty cap hit for that kind of player, so if there's an opportunity to trade him to another team, that would be advisable. Sadly, I don't think that opportunity will be forthcoming.