There are two primary forms of in-zone defence typically employed in most possession style sports (hockey, basketball, lacrosse, etc). The first is zone defence, which general involves covering areas in the defensive zone, only covering opposing players as they enter their area. The second is man to man, which involves marking an opposing player and following them around the defensive zone (or at least the prime scoring area).

This week I’ll be focusing on zone defence, looking at not only the formation but the pros and cons as well.

The goal of the zone defence is to always keep defensive players in front to protect the goal and block passing lanes to the opposition players. One of the more typical zone defences is the 4+1 (or box+1). I sort of touched on it here, and the premise is that you place pressure with one player while the remaining players form a 4 man box. As the puck moves around the zone, the defensive player who is pressuring the puck drops back into the zone and another player takes up pursuit of the puck. Generally what you see is a W or a D pressuring the puck around the zone, with the C covering for them, only pressuring when his teammate is transitioning back into the box. 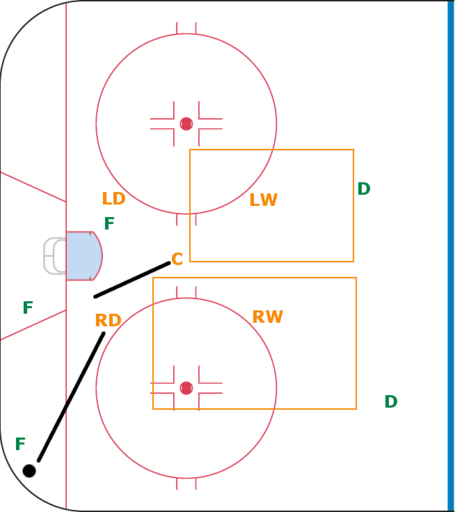 When the puck is in the corner, the RD will pressure the puck and the C drops into the RD position. The LD is guarding the front of the net. The LW can sort of cheat down into the hashmarks (keeping an eye on both the opposition D and helping in front of the net), while the RW wants to prevent the other opposition D from getting the puck in a shooting position, while also being able to provide defensive help. 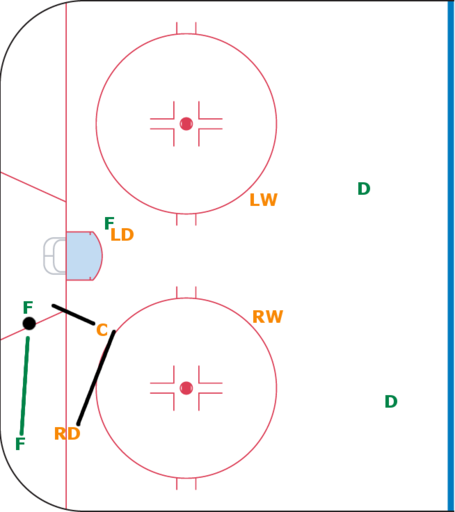 As the puck moves behind the net, the C then picks up pursuit of the puck as the RD gets back into position. The RW and LW still have their same responsibilities. It’s important the C doesn’t pressure too much behind the net in this sequence, as he doesn’t want to get trapped there if it continues to go around. 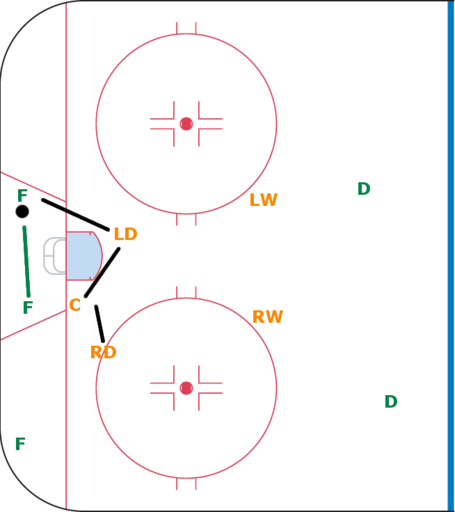 As the puck goes to the other side of the net, the LD picks up pursuit and the C then covers the LD spot. You can see why the C doesn’t want to get caught behind the net, because the RD has to worry about the winger who was initially in the corner, as well as the player the C was covering.

This pattern continues all over the ice, with the W and D doing most of the pressuring while the C picks it up briefly in transition. The only place this doesn’t occur is at the top of the zone, because you don’t want to leave a 3 on 2 low, so it’s up to the RW and LW to pressure and pull back without the C support.

The main benefits to the box + 1 are that you almost always have defensive help in the prime scoring area should you get beat. If you are the RD and lose a puck battle or miss a check, you have backup at your position. It’s a relatively safe defensive zone system in that it’s very hard to cause mini odd man breaks (i.e. 2 on 1’s in at the side of the net).

The drawbacks are that it’s often a low pressure system. It can be hard to pressure the puck and cause a turnover because you generally only send one man at a time. This system also requires discipline, meaning you really have to hold your zone and positioning. It breaks down when the wrong person chases the puck, or chases it too far without resetting. It relies on the next teammate over being in the right place and switching at the right time.

Even in a breakdown, provided only 1 player misses his assignment, there should still be plenty of defensive support from the other players. Generally you’ll see a box+1 breakdown on a long cycle followed by some quick puck movement after the first breakdown. In general, it’s a low risk defensive zone system that helps cover for breakdowns a little better than man on man.