Aging Goalies: What Does The Future Hold For Luongo, Miller & Bryzgalov?

Share All sharing options for: Aging Goalies: What Does The Future Hold For Luongo, Miller & Bryzgalov?

This offseason promises to be an interesting one, with goaltenders playing a big role. In particular, there are many storylines featuring goaltenders over the age of 30. Martin Brodeur and Dwayne Roloson will be deciding whether they will keep going into their 40s. Tomas Vokoun should be a hot commodity and this year might even be paid like one. It looks like the Roberto Luongo era is coming to an end in Vancouver, but who takes on that contract and what they give up remain to be seen. If tweets from their fans and bloggers are any indication (hah!) both Alberta teams may be shopping their over-the-hill tenders - 39-year-old Nikolai Khabibulin has one $3.75M year left on his deal and Miikka Kiprusoff, age 35, has one year left at $5M (5.833 on the cap) before the cheat code kicks in for the last year. Speaking of big-dollar contracts, the Flyers are getting ready to deal with the fallout of giving a huge contract to last year's big-name free agent Ilya Bryzgalov.

For fans and GMs alike, how goalies age is particularly important. If you are a fan of Luongo, or just want the Canucks to get as much or little for him as possible, then you'd like to know what to expect from a 33-year-old goaltender who carries a $5.333M cap hit and effectively 6 or 7 years left on his contract. After the jump we'll look at how goaltender performances and roles change as they get into their 30s and 40s.

To look at these, I went to hockey reference and pulled all goaltenders who played at least 100 games in their 20s and 30s. I used the 20s, technically all years before their age-30 season for the few goaltenders who played as teenagers, as a benchmark for comparison. In other words, I will be looking at how a goaltender's save percentage when he is, say, 35 compares to the combined save percentage for all season before he turned 30. Needing 100 games in the 20s excludes a few late bloomers like Tim Thomas. The NHL did not record save percentage until the 1983-1984 season, so these are guys with at least 100 pre-30 games that season or later. There were a total of 60 goaltenders meeting these criteria.

I will repeat this later, but it cannot be emphasized enough: this sample of goalies are success stories. These are guys who played at least 100 games in their 30s, so they must have been pretty good goaltenders who at the very least didn't have a major injury or flame out relatively early in their careers.

How Save Percentage Changes with Age

With that in mind, let's take a quick look at how save percentages changed with age. To adjust for era effects, I compared each goaltender's save percentage at a given age to his combined save percentage for all seasons before his age-30 season. So a value of 0.01 in the chart would represent finishing with a Sv% a percentage point higher than you got in your 20s, for example you were a 0.905 goaltender as a young'n' and put up 0.906 the season you turned 31. I've plotted the median as well as the first and third quartiles, those who did relatively well or poorly at those ages: 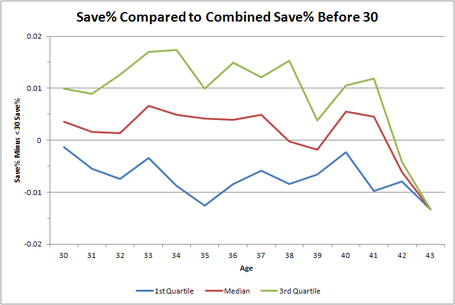 You might be surprised by how flat it is - it appears that goaltenders age quite well! Half the goaltenders that played when they were 38 had a better save percentage then than they did in their 20s. That sounds like great news for the Flyers and whoever trades for Luongo. Unfortunately, this is largely due to survivorship bias. If a goaltender is playing at 38 he is probably a legend, at least locally. He also probably doesn't have, or at least hasn't had, major injury issues in the last few years because these are more likely to be career-ending at that age. Similarly, he likely hasn't had any bad seasons as those tend to send older goalies out of the league. In other words, those that have made it are likely very good, have had better than average injury luck and in general have aged better than their agemates that didn't make it. Also, this ignores how many games they played which can definitely be a factor with age.

How Roles Change with Age

Instead of focusing on save percentage, let's look at how many goaltenders remain starters, shift to backup duty and don't play at all for each year of age. I'm defining starting as playing over 40 games in the season and being a backup as playing 40 or fewer, so this includes third stringers or a guy getting injured early in the season and missing the rest of the year. All players who did not play a single game that season fall under "Did Not Play" whether they were retired, injured, playing in another league, etc. Players who are currently playing but younger than the given age are excluded from its sample. 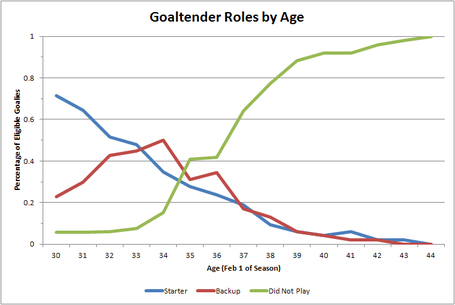 The chart speaks for itself but I'll ruin that by pointing out that the general pattern we see is that goaltenders tend to shift from starting to backing up someone else early in their 30s (see: Luongo, Roberto) and from backup to retired in their mid-to-late 30s. A couple notable years are 34, the age in which more of these goaltenders are backups than starters and 37, when more were retired than played so much as one game. It bears repeating - these figures are all the goaltenders that played at least 100 games, the guys that had at least some success over 30.

Sample size is a common caveat, but this is particularly true for goaltenders who have already made a deep run. I think this is quite informative for guys like Luongo, 33, Bryzgalov, 31, and Ryan Miller, also 31, but isn't much help for old men like Brodeur, Roloson and Khabibulin. So few made it as long as they have that we don't have much to go on. That's the rub with goaltenders on my side of 30 - you can't expect them to keep producing for long.