We started with sixteen, but in the end, there could only be one winner. Don Waddell defeated Doug MacLean in yesterday's final, and in doing so became this year's Not-So-Sweet-Sixteen champion. It was Waddell's third consecutive victory by less than 60% of the vote, but that shouldn't diminish the gravity of his triumph.

After all, Waddell's path to victory required him to beat a who's who of foolishness: a man who didn't - doesn't? - know how to use a courier, a man who hitched his wagon to Len Barrie (don't ask Smytty about his investment in Bear Mountain), a man who thinks that Steve Mason is the only non-cannibalistic goaltender on the planet, and a man who works for (spits) Sportsnet.

No, it wasn't easy, but Waddell's long-term employment with one of the worst franchises in league history during almost the entire post-lockout period helped him to cement the win. So Congratulations to Don Waddell, the worst general manager in the league under the current collective bargaining agreement! 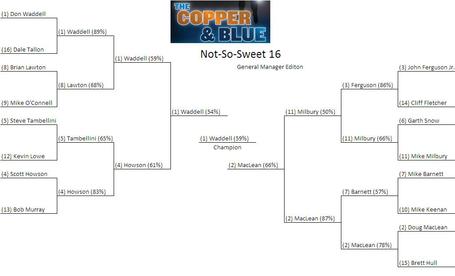