Scoring Chances, Fenwick and Corsi Throughout the Year

Share All sharing options for: Scoring Chances, Fenwick and Corsi Throughout the Year

We've taken a look at the Oilers at each quarter point during the season. After the first quarter, there was plenty of hope in Edmonton. The team had a record of 11-8-2, a goal differential of +6, and while the Fenwick and Corsi measurements weren't looking too good, the club was doing well going by scoring chances. The second quarter wasn't as successful. The team's goal differential was a brutal -14 in that segment, and they had an even more brutal 5-14-1 record. The chances started to conform to the Fenwick and Corsi metrics, and the club's overall record of 16-22-3 meant that the season was basically done.

The Oilers performed similarly in the third quarter as they had in the second going by goal differential at -12, but their 9-10-3 record made for a lot more points in the standings. The last quarter was more of the same. The Oilers were 7-8-4 with a -7 goal differential. After the jump, we'll look chart the team's possession numbers overall, and compare the team's performance on the road with their performance at home. 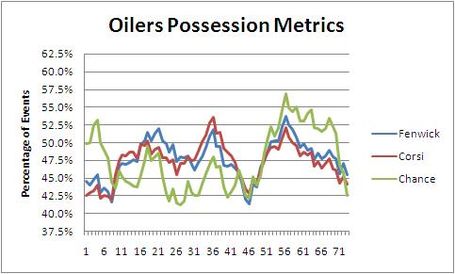 That's a particularly ugly tail on the chance line. The other two metrics were in slow decline from the trade deadline to the end of the season (point 53 is the first to include a game after the trade deadline, and point 62 is the first to include only games after the trade deadline). It's not something that bodes particularly well for next season, but I don't think it should be overly worrying either. The club will make changes over the summer, and hopefully those changes will bolster a club that had a hard time keeping these metrics over 50%.

That chart shows a lot of volatility. But I wondered how much of that was the impact of some segments containing a lot of road games while others had a bunch of home games. As such, I decided to create a similar chart that shows the team's ten-game moving average in Fenwick, Corsi, and Scoring Chances in just road games: 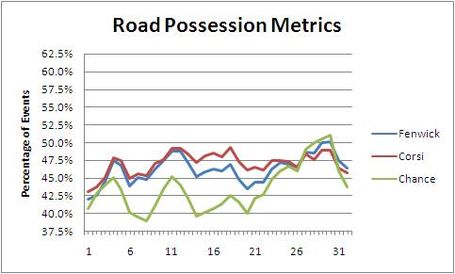 So they were poor on the road the whole way. Their Corsi line actually never crosses the 50% barrier at any time during the entire season, and never dips below 43%. That's a substantially tighter range than what we saw on the overall chart. During even strength play on the season as a whole, the team earned 45.5% of the Fenwick events, 46.1% of the Corsi events, and 43.2% of the scoring chances while playing on the road. Yuck.

But as discouraging as that chart is, the home version helps to ease the pain: 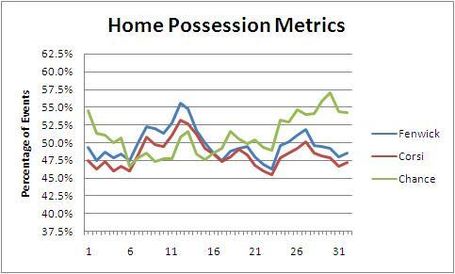 Wow! None of the possession metrics ever dip below 45% during a ten-game stretch, and the team's chance percentage at home drifts up to 57% at one point near the end of the year. During all of the team's home games, the Oilers earned 49.7% of the Fenwick events, 48.1% or the Corsi events, and 51.7% of the scoring chances while playing at even strength, so at least they were competitive in their own barn.

I suspect that this kind of split is pretty typical around the league. Teams play about 25% of their road games as the second half of back-to-back games, are forced to deal the effects of travel (which often means changing time zones), and lose the ability to dictate match-ups. That last point was particularly significant for the Oilers because several of their best offensive players required shelter in order to have success. Here's hoping they grow up fast!